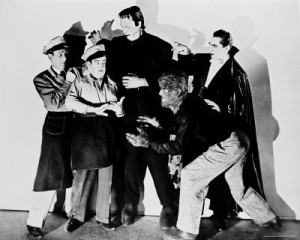 As historical evidence has shown, some of the most threatening, foul, and evil monsters that have ever lived, have met Bud Abbott and Lou Costello. Why? What’s the draw? Why was a popular comedy duo poised to be the apple to so many a monsters’ eye? Could it be the allure of meeting celebrities? Then why did Frankenstein’s Monster not track down Clark Gable? Couldn’t the Invisible Man easily have watched Rita Hayworth take a shower while stalking her? I could imagine that Dr Jekyll and Mr. Hyde might have just needed their help with the impeccable timing of the “Who’s on First” routine.

What about me? I would love to meet Dracula or The Mummy. Maybe even play some tunes with the Phantom of the Opera or use the Hunchback of Notre Dame as a wing-man – he makes you look better..;) There are thousands like me who would be happy to know that they were mutilated by the Wolf Man. What a great story for your surviving family to tell! So, why Abbott and Costello? Easy. THE THRILL OF THE HUNT. If you were a hideous monster, what could be a more perfect compliment than running away in utter terror, screams being orgasmic to the ears, and a constant affirmation that you are the supreme evil in the world. Just an observation…

I would like to take this time to let all monsters, young and old, know about some other promising duos that I feel could live up to the standards of “scared to death but I might slip out of your fingers”: