These Blurbs include a Literal Bloodbath: An SML Horror News Roundup

Very sexy vampires, very unsexy hillbillies, and more. Check out the news that’s been burning a hole in our inbox.

They came for the beer. They stayed for the brains.

When a powerful hurricane hits Asheville, North Carolina, the microbrewery capital of the south, gallons of contaminated coal ash spill into the city’s water supply and turn citizens into flesh-eating zombies on the eve of Asheville’s annual zombie walk. With the local government covering up the spill in the name of profit, Piper, a hardworking barista; her weather-loving brother, Fitz; and Jerry, a homeless Iraq veteran, form an unlikely trio desperate to save the city they love from becoming a city of the dead.

Back the independent film on kickstarter.com. 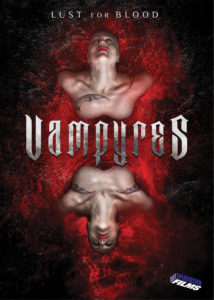 Remake of 1974 Classic Vampyres Coming to DVD and Streaming —

Faithful to the sexy, twisted 1974 cult classic by Joseph Larraz, Vampyres is an English-language tale that pulsates with raw eroticism, wicked sado-masochism and bloody, creative gore. Director Victor Matellano (Wax, 2014; Zarpazos! A Journey through Spanish Horror, 2013) sets his story in a stately English manor inhabited by two older lesbian vampires and with their only cohabitant being a man imprisoned in the basement. Their lives and lifestyle are upended when a trio of campers come upon their lair and seek to uncover their dark secrets, a decision that has sexual and blood-curdling consequences.

Vampyres will be released October 18, 2016 on DVD and VOD/streaming. Check out the NSFW trailer below.

Vampyres from artsploitation on Vimeo. 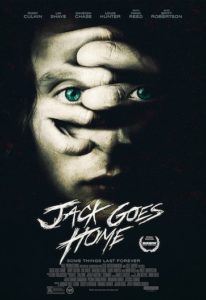 Jack Thurlowe (Rory Culkin) discovers that his parents have suffered a brutal car accident. Upon returning home for the funeral, the volatile nature of Jack and his mother Teresa’s relationship boils to the surface and the constant barrage of sympathy from the town starts to weigh on Jack’s grieving process.

With the arrival of a mysterious new neighbor, Duncan (Louis Hunter), Jack finds audio recordings and videotapes left behind by his father that lead him to question childhood memories and the very foundation of his identity.

Jack Goes Home was written and directed by Thomas Dekker (star of NBC’s Heroes, FOX’s The Sarah Connor Chronicles). The film is now available in select theaters and On Demand/Digital.

On October 17th, Philadelphia’s film underground reached the world via PUFF: The Best of the Philadelphia Unnamed Film Festival 2016, a half-hour anthology of short horror films, that aired exclusively on The Monster Channel. The anthology features a diverse selection of films from across the U.S., highlighting a staggering variety of unique, and uniquely horrific, visions.

PUFF: The Best of the Philadelphia Unnamed Film Festival 2016 will re-air through the end of October. Consult The Monster Channel’s listings at facebook.com/monsterchannel. Access the channel through its website at monsterchannel.tv or Roku app.

Skull Appreciation Society Gets a Makeover —

The Skull Appreciation Society recently announced a new website design. In addition to a graphics rebrand, SAS has upgraded their shop, featured artists section, and blog.

Check out the gorgeous new site at skullappreciationsociety.com. 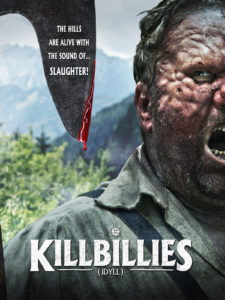 Proving that the American South does not hold a monopoly on sexually depraved, bloodthirsty hillbillies, Killbilllies (Idyll, Idila) depicts a harrowing tale of abduction, violence, and hoped-for survival, in Slovenia’s first ever horror movie.

A group of fashionistas from the city, including models Zina and Mia, make-up artist Dragica and photographer Blitcz, begin to shoot on an idyllic countryside hilltop. But soon, two physically deformed psychopathic countrymen approach them and quickly attack. After the terrified group finds themselves chained in a basement and awaiting their gruesome fate, they decide they must fight no matter what the odds. A wild, bloody, taut clash ensues between urban and rural, women and men, between savages and civilized man. A fresh, sadistic take on such classics as The Hills Have Eyes and The Texas Chainsaw Massacre.

Killbilllies (Idyll, Idila) will be released October 25, 2016 on DVD and VOD/Streaming.

PUFF, PUFF, Don’t Pass on This: An SML Horror News Roundup
Stuff Monsters Like in the Space Race Against Russia
October Will be One Giant “Party” on SML