Here’s the news that’s been gnashing through our inbox to get to you.

Boston Underground Film Festival (On Now) – The 19th annual Boston Underground Film Festival (BUFF) returns to Harvard Square to kick off New England’s spring festival season, bringing with it a smorgasbord of phantasmagoria, dark comedy, thrillers, killers, and chillers to the Brattle Theatre and Harvard Film Archive from March 22–26. This year’s schedule boasts an eclectic selection of weird, wonderful programming packed with flavors for cineastes of all tastes. If you’re there, tell us about it! Learn more at bostonunderground.org.

MMBF Trust’s ‘Emma Dark Horror Award’ Returns for Another Year (Submissions Open) – The Matthew Martino Benevolent Fund (MMBF) Trust again offers its “Emma Dark Horror Award.” Focusing on providing opportunities and funding for horror filmmakers and creatives, the scheme offers the winner a variety of perks, including publicity for their work, a virtual mentoring session with award-winning filmmaker Emma Dark, assistance in developing their film or idea, plus £250 prize money towards their next project or creative endeavour. For more details and to submit your film or idea, visit filmfreeway.com.

Hex Media Announces New Horror Anthology “For We Are Many” (Submissions Open) – Hex Media founder Lawrie Brewster and producer Alex Harron are developing a new anthology, described as “a collection of original, international horror shorts inspired by daemonology and the occult.” The film will feature a host of familiar names, as well as providing an exciting opportunity for up-and-coming filmmakers to get involved. Among the directors already confirmed are FrightFest Alumni Liam Regan (Banjo), Brad Watson (Hallow’s Eve), and Katie Bonham (Mindless), as well as genre icon Nicholas Vince, best known for his roles as the chatterer in Hellraiser and Kinski in Nightbreed. If you are a filmmaker and want to get involved, learn more at hexmedia.tv. 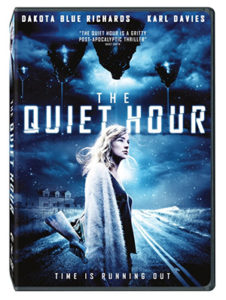 The Quiet Hour (Now on DVD) – The Quiet Hour is now available on DVD in an unrated version. Winner of Best Narrative Feature at the Kansas City Filmfest, the film is set to stun science fiction and thriller fans. Humans are few and far between since Earth was invaded by extra-terrestrial machines that harvest the planet’s resources and relentlessly kill its inhabitants. In a remote part of the countryside, a feisty 19 year old girl, sets out on a desperate attempt to repel a group of bandits and defend her farm. Watch the DVD trailer. 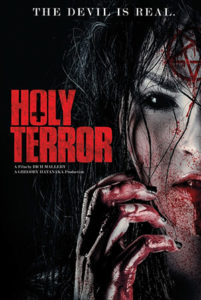 Holy Terror (Coming Very Soon) – Believing their deceased son isn’t at peace, Molly and Tom ask a medium to make contact. But after they invite a vengeful demon to cross over, the couple must enlist the help of a disgraced priest to attempt a dangerous exorcism. The film will be available through Amazon Prime on April 1, 2017. Follow the film on Facebook.