Once we make it through Labor Day weekend, it’s usually a straight shot into Halloween season—which means creepy movies and creeptastic film festivals for the next 8 weeks. Hurrah! Check out these terrifying new projects available now or coming soon.

I Know You’re in There Available Now on VOD – After his mother’s suicide, Tom Redding (Will Hurst) discovers that he has a sister named Chloe (Grainne McDermott). Chloe is catatonic and completely paralyzed. Tom takes her to their dead mother’s isolated home, partly in hopes of documenting her rare illness. But can Tom create a bond with his sister without being driven mad by a supernatural evil within? I Know You’re in There is now available across a wide variety of platforms. Watch the trailer:

Garbage Pail Kids Doc Widely Available Soon – Billed as “the pivotal documentary on the Garbage Pail Kids,” 30 Years of Garbage: The Garbage Pail Kids Story revisits the artists who made these collectibles famous. In addition to dozens of artist and collector interviews, the documentary shows a rare glimpse into the corporate culture of Topps as they launched Garbage Pail Kids, through the height of the cards’ fame, the downfall from the legal battle with the Cabbage Patch kids, and their ultimate demise. Currently in limited theatrical release, 30 Years of Garbage will be available on DVD/VOD on September 20, 2017. Watch the trailer now: 30yearsofgarbage.com

The End of the End Available this December – Continuing where the critically acclaimed cult TV series left off, Todd & The Book of Pure Evil: The End of The End: The Animated Feature (or TATBOPE: TEOTE: TAFF for short) returns to Crowley Heights to find Todd, Jenny, and Curtis reuniting to fight evil when the Book of Pure Evil returns to Crowley High. The trailer, featuring tons of blood, guts, boners, decapitations, dildo nunchucks, and of course super badass demons, promises that the film is going to be loaded with the same juvenile jokes, gore gags, and satanic sing-alongs that made the original TV series a worldwide hit. The film just saw its world premiere last week and is scheduled to be available on VOD, DVD, and Blu-ray on December 12, 2017. Watch the trailer now:

BHFF Announces Full Lineup of Features – The Brooklyn Horror Film Festival returns to New York City from October 12–15, 2017, bringing with it more ghouls and ghosts than ever before. BHFF will screen more than twice as many feature films as last year. The entire lineup has now been announced, which includes exciting films, dynamic events, and more venues that expand the festival’s activities. To see the lineup and buy tickets today, visit brooklynhorrorfest.com.

Monster Read: There’s Nothing under Your F*cking Bed – Average children’s stories kind of suck. These quick and clever “stories” are inappropriate fun for the whole family! Based on real life experiences, these are stories that parents can read to themselves, after all the little monsters are tucked in and sound asleep. With more than 14 years of experience in behavioral health, author Nick Wilkinson has been working in close contact with kids from all walks of life. Other inappropriate children’s books include: Nudies On Your Phone, The Bottle Or The Boob, Picky Eaters Suck, and H Is For Heroin. Find There’s Nothing under Your F*cking Bed on Amazon, here: amazon.com.

Morbid Read: DEATH: A Graveside Companion – A one-of-a-kind art history, DEATH: A Graveside Companion is a captivating treasury of images that examines humanity’s quest to imagine, respond to, and come to terms with our own inescapable end. Seven themed chapters exhibit never-before-published artworks, artifacts, trophies, and keepsakes from around the world and throughout the ages, counterbalanced by 19 insightful essays from contributors across a broad arc of disciplines and perspectives. Look for the book from publishers Thames & Hudson on October 24, 2017. See a preview of the book now on Morbid Anatomy. 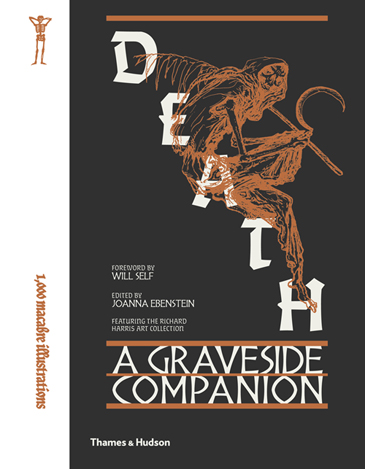 THIS JUST IN - "CIRCUS OF DREAD:" Director Mark Savage's New Film To Star Bill Oberst Jr. & Domizia...
The Unkindness of Ravens Set to Premiere at FrightFest 2016
524. Monsters Like Roseanne