In many ways, we enjoy the weeks leading up to Halloween more than the day itself. The decorations. The planning. The antici….

And most of all, we love all the wonderfully horrific and macabre projects everyone is working on! A host of new horror films are being debuted at festivals and released for home viewing.

The 3rd Brooklyn Horror Film Festival has unveiled the entirety of its massive event lineup. Among the live events, BHFF and Drunk Education are presenting an inebriated talk on religious horror with Bad Religion. New events include the Dread Central-presented drinking game-night Drinking with the Dread: Return of the Living Dead Edition and a special New York-centric live Spirits Podcast that dives deep into local legends, cryptids, and more. The BHFF runs October 11–18, 2018, with screenings and events across Brooklyn.

See the lineup and learn more at brooklynhorrorfest.com.

Ithaca Fantastik has announced the first wave of programing for the 7th edition of the Upstate New York celebration of genre film, electrifying music, and dynamic art. The event returns to their homebase at Cinemapolis for the 10-day event running October 26–November 4, 2018.

See the lineup at learn more at ithacafilmfestival.com. 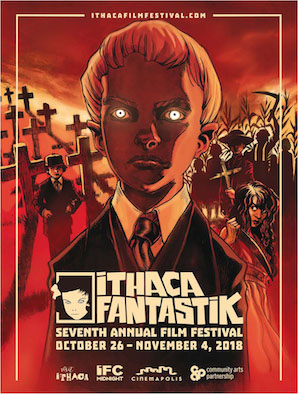 For those not in the know, the Miskatonic Institute of Horror Studies is the world’s longest-running university-level educational organization devoted to the study of horror history, theory, and production. This month, they announced a new Los Angeles branch to complement those in London and New York. The new Los Angeles branch will be hosted at the Los Feliz headquarters of the Philosophical Research Society, founded by famed occultist Manly P. Hall in 1934. The pilot season of classes includes:

Learn more about the Miskatonic Institute of Horror Studies at miskatonicinstitute.com.

American writer Richard Humphries has released Therian Red, a science-fiction/creature-run-amok story told entirely from the perspective of the creature. Red has lived his whole life in a small, concrete cell and suffered numerous experiments at the hands of his human captors. He manages to escape and learns about the outside world before turning his attention to revenge.

Therian Red is currently available worldwide on Amazon in paperback and Kindle, and Barnes & Noble Nook. The follow-up novel SunChasers is currently in the works.

What October Brings: A Lovecraftian Celebration of Halloween celebrates the dark traditions of the autumn rituals of Halloween and Samhain in homage to the uniquely fascinating fiction of HP Lovecraft. Masters of the short story offer you a “once in a lifetime” trick-or-treat experience. Check out the contents:

The commissioned cover of What October Brings was created by acclaimed Italian painter Daniele Serra. The collection is available in September 2018 in print and ebook editions. 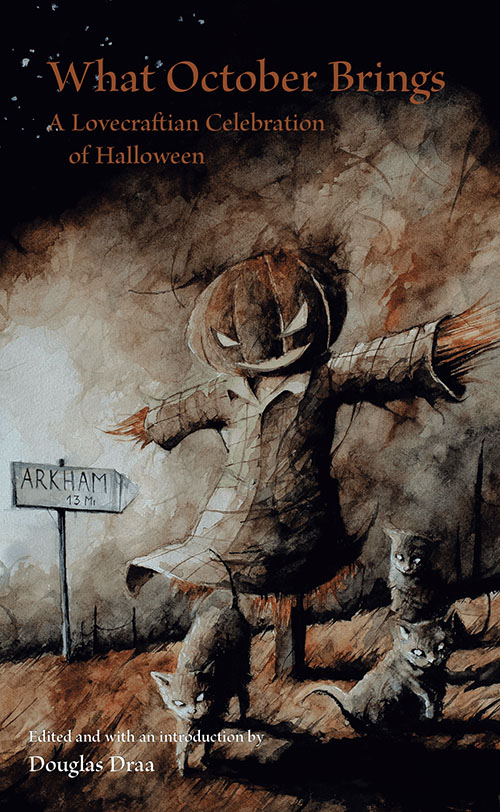 Ugliest Child Ever Now Available on Digital and DVD

In the new horror-comedy Cynthia, a desperate mother gives birth to the most hideous child ever imagined. Cynthia spawns from the mind of Girls and Corpses magazine creator Robert Rhine and was directed by Devon Downs and Kenny Gage. The film stars Scout Taylor-Compton (Halloween, 2007), Sid Haig (House of a 1000 Corpses), Bill Moseley (Repo! The Genetic Opera), and Robert LaSardo. Don’t miss the birthing terror that is Cynthia, now available on digital platforms and DVD. 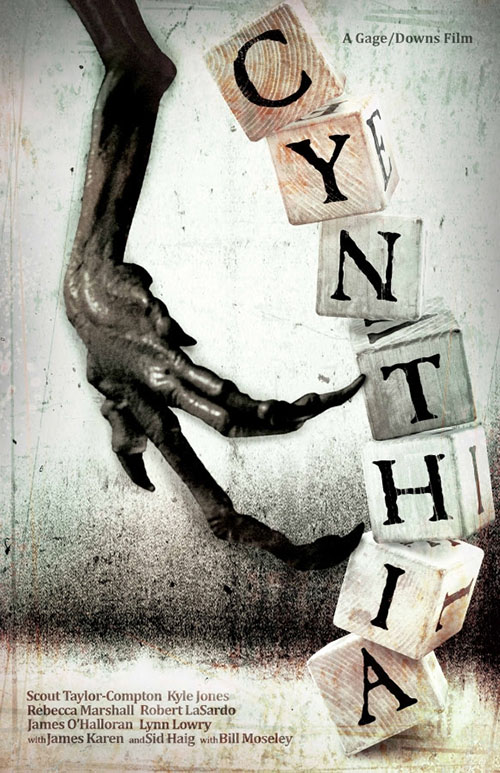 The forthcoming fantasy-thriller short film Goodnight, Halloween has taken more than 12 years to complete. As a prelude for the film, the filmmaker has released a “scene setter” for the world of Goodnight, Halloween. Alternate Detroit 1986 is a world where Halloween creatures have co-existed with mankind forever—until the Senate passes a law that all creatures can be exterminated on sight. Forced into hiding, these creatures have formed uneasy alliances in an effort to evade the efforts of the KRONA death squads.

Since Hell House LLC was released by Terror Films in Fall 2016, critics and fans have wanted more of this “must see” horror film. Now, Terror Films has teamed up with Shudder, the leading premium streaming service for thriller, suspense, and horror, for the exclusive release of the sequel: Hell House LLC II: The Abaddon Hotel.

The sequel is available exclusively on Shudder through the end of the year. As part of the release, Shudder is offering fans a 14-day free trial with promo code HH2TFSH. Check out the film trailer below, and redeem the offer at shudder.com:

When James ventures into the dark, snowy forest in search of firewood, he finds a woman hidden in the frozen terrain. James brings her back to the cabin for help, but the family has no way of knowing that the woman’s presence will be the catalyst for a series of horrifying events and bloody carnage that will change their lives forever. Dead Night features Barbara Crampton (Re-Animator), Brea Grant (A Ghost Story), and AJ Bowen (You’re Next), and is brought to you by the team behind John Dies in the End.

Take the techno-paranoia of Black Mirror, add the intergalactic body horror of John Carpenter’s The Thing, adapt them into a VHS board game, and wrap it all up in a bitingly satirical Christmas-movie package, and what do you get? Await Further Instructions from British director Johnny Kevorkian and co-starring David Bradley of Game Of Thrones, Doctor Who, and Harry Potter fame.

This film will be in theaters and on VOD October 5, 2018. Watch the trailer now:

The Witch Files Coming Soon to Digital Platforms and DVD

High school becomes literal hell for a group of young women who tap into witchcraft in order to fulfill their every wish in The Witch Files. Their newfound power, however, comes at a deadly cost, and before long they find themselves under attack from one of their own—who isn’t about to give up the good life without a fight. The film stars Paget Brewster (Criminal Minds, Community), Holly Taylor (The Americans), and Greg Finley (The Secret Life of the American Teenager).

The Witch Files arrives on digital platforms and DVD on October 9, 2018. Watch the trailer now:

The Dark Hits Theaters and on VOD this Halloween

On the outskirts of a small town lies Devil’s Den, a mysterious tract of woods where many have entered but no one has ever left. The local rumor is that the spirit of a young girl who was horrifically murdered there haunts and hunts in this dense forest, brutally slaying anyone who dares to step into her terrain. When a man with a dark past crosses her path, a series of events are set in motion that may lead to a peculiar kind of redemption for two tragically tortured souls.

The Dark stars Nadia Alexander (USA’s The Sinner, Netflix’s Seven Seconds), Toby Nichols (Netflix’s Iron Fist, Trumbo), and Karl Markovics (The Counterfeiters). It will be available in theaters and video on demand on October 26, 2018. Watch the trailer now:

Get Your Tickets Now!: GeekOut 2015 to be Held June 6-7
It’s a Great Season for Horror Fests!: An SML Horror News Roundup
Stuff Monsters Like Parties in Charlotte