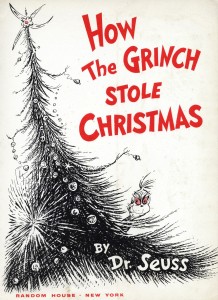 Was kind to their hound…

Who lived just North of Who-ville,

At night or all day,

Poor Max sat home alone. The Grinch was away!

Then he would return, with a Grinchy old frown,

And say things to Max about going to town.

Today he was yelling about something with trees.

Something about roast beast and mistletoe wreaths.

Max didn’t care. He was glad for the noise.

And hoped that the Grinch would toss him one of those toys.

You know, the kind that squeak and make that loud squawk…

Wait – he’s grabbing his red coat. Is it time for a walk?

The Grinch laughed in his throat and put on a red hat.

And somehow Max knew that that was just that.

“So much for the walk,” Max thought with a sigh,

But saw a glint in the Grinch’s left eye.

“Did he just say reindeer?” Now Max was confused.

To tie a big horn on the top of Max’s head.

At which point Max thought, “Guess I’m not getting fed.”

We all know what came next, at least for the Grinch.

He stole all of Who-ville’s gifts in a pinch,

While Max saddled on in that ramshakle sleigh

And helped the Grinch steal Christmas away.

When they were done, Max sat down for a nap.

He was exhausted from hauling all of that crap!

Next thing Max knew, the Grinch had left him alone,

Cold and lonely in that drafty old home!

He’d gone back to town to share in the Who-feast.

Max thought, “I bet he won’t even bring back some roast beast….” 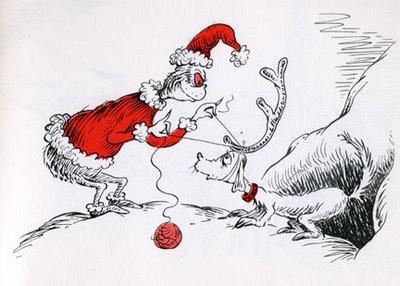