472. Monsters Like Dressing up for Their Office Christmas Party

Man, the medieval ages were tough. Anyone who’s lived through them can tell you they were nothing but centuries of war, famine, pestilence, and contaminated water sources.

Pretty much the way you feel about all your corporate holiday functions, right?

It’s no wonder, then, that the notorious Christmas figure who emerged during that time was Belsnickel. The counterpart to Saint Nicholas, but followed by Krampus, Belsnickel is the gift giver that no one wants at their holiday party. Belsnickel wears dirty, ragged furs, often the mask of an ugly old woman, and always has his tongue out—like Rob from accounting after he’s had too much of his “special punch.” He carries a switch with which to beat naughty children (or Karen from marketing) and pocketfuls of sweets and nuts for the good children.

Because good kids deserve stale cakes from a hobo’s pockets.

Unlike the holly, jolly, image of Santa, Belsnickel doesn’t wait to appear on Christmas Eve. He’s been known throughout the year to snatch children out of their homes for a good beating in the woods. And he doesn’t sneak into the chimney to leave his gifts. He taps on the window with a creepy finger until you spot him—only then will he leave something…if you deserve it.

There’s no escaping Belsnickel. This grim character is a year-round fair-weather friend. But he will not stop when he sees bad behavior, and becomes embittered when he is deterred from his path for justice. Eventually, you will fear the thought of his presence at all.

Coworkers beware—you are in for a scare! 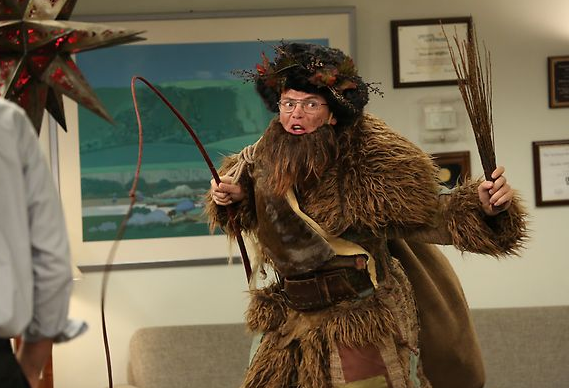