This press release was sent to us by our friend Bill Oberst Jr. regarding his upcoming film. Interested in learning more about Oberst and his upcoming projects? Stay tuned – we’ve got a great interview coming soon! 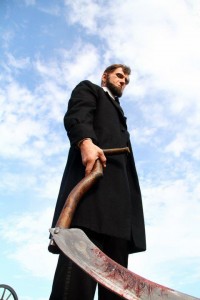 Principal photography is nearly complete on Abraham Lincoln Vs. Zombies, despite a curse placed on the production by a Savannah, GA resident. Richard Schenkman is directing from his own screenplay for The Asylum. Abraham Lincoln Vs. Zombies stars Bill Oberst Jr. as Lincoln and is set for a May 22 release date. For more info on the film visit The Asylum at http://www.theasylum.cc/product.php?id=202

Oberst, known to over 60 million Facebook users as the cyber-stalker in Jason Zada’s viral Facebook application Take This Lollipop, says it is one of the best roles he’s ever had, and he’s playing it straight. “Richard Schenkman’s script is an incredibly fun mix of alternate history and horror. This is very much the Lincoln of history…except that he battles the walking dead with a bloody farm implement.”

Many of the film’s lead zombies are being played by self-professed ‘zombie geeks;’ actors who specialize in portraying the undead, like Perry Foster (Arise; The Walking Dead.) The production is operating under a ‘curse’ placed on it by an anonymous Savannah resident who wrote in an e-mail to The Asylum “I place the Curse Of Savannah upon your head and may it follow you the rest of your life if you make this film here. You have been warned.” Savannah locations have included the historic Fort Pulaski, where Confederate troops battled a Union onslaught in 1862, leaving nearly 400 dead.

Oberst says The Asylum’s plot synopsis sums up the action nicely: While the Civil War rages on, President Abraham Lincoln must undertake an even more daunting task; Destroying the Confederate Undead. “I think horror fans are a lot smarter than we are generally given credit for,” says the actor. “Zombie fans will love it, of course, but so will those into alternate history, a big interest of mine; while battling the zombie scourge Lincoln encounters General Stonewall Jackson (Don McGraw,) his old love Mary Owens (Baby Norman) and a young Teddy Roosevelt (Canon Kuipers) and every one of them is presented as they were in history. It’s like an unknown chapter in a very kick-ass history book.” 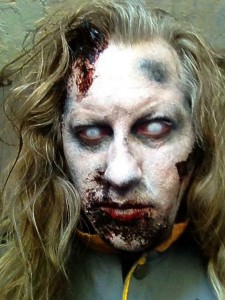 The exclusive first pics included show Bill Oberst Jr. in full Lincoln-mode and a continuity shot of Perry Foster as a lead zombie, created by the production’s key make-up artist Renonda Anderson, whose credits include AMC’s “The Walking Dead” and “Dance Of The Dead.”

Besides Lincoln, Oberst has dark roles in two feature films set for February DVD release: a bloody cameo as the lustful Brother John in Nude Nuns With Big Guns (Feb 14) and a turn as the demon who torments Robert Loggia in Apostle Peter And The Last Supper (Feb 21.) He is also playing a nasty black-tongued devil in Brad Bruce’s The Devil’s In The Desert this month, and will go straight from wrap on Abraham Lincoln Vs. Zombies to the set of the Micheal Landon Jr.-helmed Hallmark Channel production, The Confession, in which he reprises his role of stern Amish father Samuel Lapp from Landon 2011 TV-movie The Shunning. “It’s not me,” says the actor, “it’s because I’m ugly. That’s why I work so much. Beauty is highly overrated.”

Exclusive New Images from “House of Monsters” Web Series!
Want to be the Fresh Braaaaaaaaaains behind the Asheville Zombiewalk?
A New Online Source for Indie Horror!: An SML Monster News Roundup