Here at the SML Haunted Mansion and Blog Laboratory, we’re always excited to see GeekOut come to Asheville, bigger and better than each year before. This year’s event proved to be no exception, with an ever-increasing list of panel, workshops, contests, kids events, and much more.

In fact, GeekOut will feature a special guest presentation from yours truly, the Head Monsters of SML. You can catch us on Saturday, June 7, 11:00 am, in Room 406 for our interactive presentation “No Sparkle and All Bite: Vampires that Don’t Suck.” Look for more info about what we have in store for our victims, er… audience, very soon (and keep an eye on the site for a whole bunch of new vampire-themed posts).

But the fun doesn’t stop there! Also in attendance will be the voices of Pinky and the Brain, cast members from The Walking Dead, and much, much more! On a local note, Sunday’s Pony Parade against Bullying will be marshaled by local hero and fandom celeb Grayson Bruce.

Check out the press release below for more info. Tickets can be purchased online at GeekOutAVL.org, and don’t forget to follow them on Facebook. Ve vant to see you there! 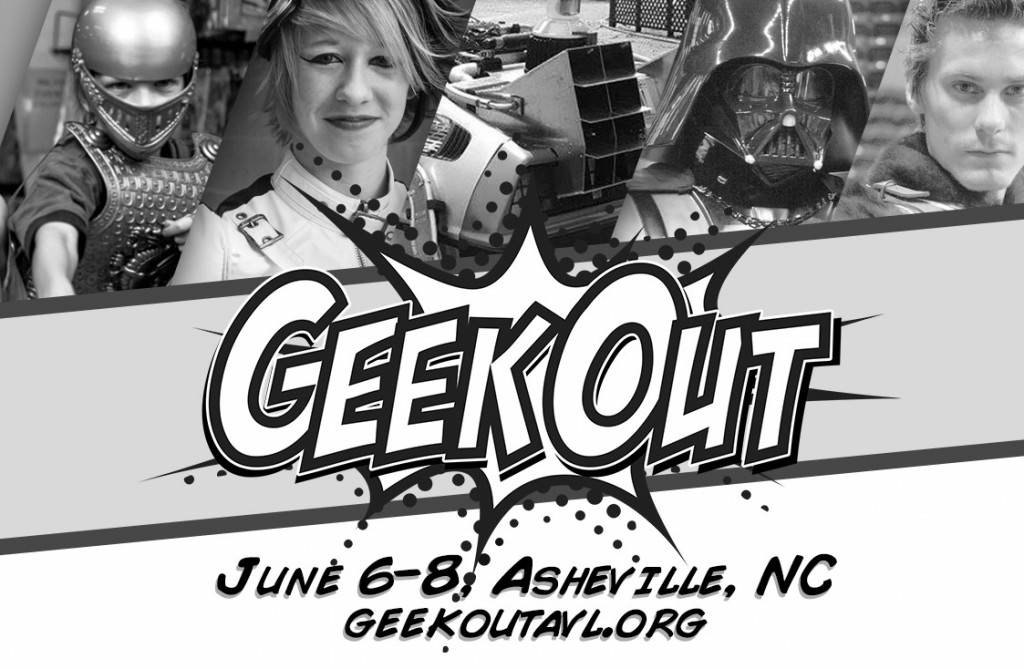 ASHEVILLE, NC — GeekOut 2014 will be held June 7-8 at UNCA’s Sherrill Center and Kimmel Arena, as well as other venues around Asheville beginning June 6. The third installment of “WNC’s Popular Arts Convention” will celebrate all aspects of pop culture, from film, television, and animation to costuming, comics, and stage performance.

After two successful years as a one-day convention, GeekOut’s organizers decided to broaden the show into a weekend-long, festival-style format. Gaming and workshops will begin at the Sherrill Center on Friday, June 6, with the main convention June 7 and 8, and plenty of additional events in Asheville all three nights.

“Last year we had fourteen panels and workshops; this year there are closer to a hundred,” said Janae Elisabeth, GeekOut’s Programming Director. “Each of our main tracks is about as big as last year’s whole convention.”

In addition to panels, performances, and workshops, GeekOut will feature vendors and artists from across the Southeast, combat and stunt demonstrations, live-action role-playing, and costume contests in adult, children’s, and group categories. Fan-built replicas of famous cars fromGhostbusters, Back to the Future, and Scooby-Doo will also be on the scene. Other events include an Anti-Bullying “Pony Parade” and even an honest-to-goodness wedding.

“When people get married at your con, that feels really cool. It’s a milestone,” said GeekOut Director Ken Krahl.

GeekOut hasn’t forgotten the nightlife. Friday evening will feature the return of Geektastic, a burlesque revue in the vaudeville tradition at Boiler Room. Saturday night, the GeekOut mid-party will feature producer 9th Phoenix presenting Heart of Fire, a full-cast theatrical electronica performance inspired by Igor Stravinsky’s “The Firebird,” followed by SHELLSHOCK, one of Asheville’s most popular dance nights.  Finally, on Sunday evening, Cripps Puppets and Toybox Theatre present Wham, Bam Puppet Slam: GeekOut Edition, which will bring hand-picked puppeteers from across the country together at the Mothlight for an evening of adult-oriented art and comedy.  Admission to all after-hours events is discounted with a GeekOut Weekend Pass.

“All conventions are about bonding over a shared enjoyment of movies, books, TV and comics,” said Krahl. “The artistic culture in Asheville can’t help but flip that formula—to make an event like GeekOut not just a celebration of what we consume, but of the things we create.”

Tickets for GeekOut are on sale now at geekoutavl.org. Weekend passes are discounted through May at $25 for adults and $5 for children 5-11.