Hellhounds Handbook: Being Dead in China Doesn’t Pay Like it Used To

Being a corpse in Beijing is hard work. Call me an old fashioned capitalist, but I believe that a grueling day of labor deserves good pay.

That being said, there is a cool holiday in China called Qingming that is recently making a resurgence.  English newspapers call it ‘tomb sweeping’. You celebrate by visiting your dead relatives’ graves. You might even clean their tombstones with a broom.

But the real fun is the ritual of setting things on fire. 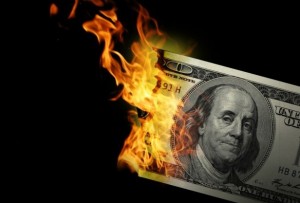 The living burn fake Chinese and American currencies, photos, blank checks, and intergalactic passports on the graves of their loved ones.

Because food and transport cost money on the other side. Personally, I feel this is kind of a raw deal. You live your whole life, and when you die, you find that food and taxi cabs cost just as much as when you were alive. How insulting.

I guess we can be thankful that many of us future corpses will have living relatives willing to burn fake money on our graves. Apparently burning money sends it directly to the wallets of deceased relatives, right where it’s needed most.

Qingming was banned for decades by the Communist Party, but is recently making a resurgence in popularity. Probably because it’s just a lot of fun to burn things in cemeteries.

Here’s why the dead are getting gypped. 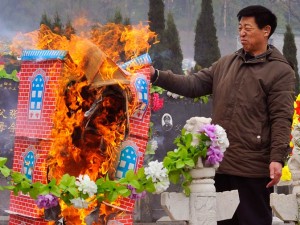 A Chinese man ‘buys’ his dead relative a house. . . . by burning it during the Qingming Festival.

Years ago, if you celebrated Qingming, you would bury real items at your relatives’ graves. Gold, silver, jewelry. Now, the best the dead get are fire-singed computer print outs with pictures of rubies and diamonds on them. If I were on the other side and my relatives magically transported a photo of precious jewels, I would feel cheated. What deadbeats.

You think I can pay my afterlife rent with a burnt check and a photo of some rubies?

If I were dead, what would I really want to spend eternity with?

A proper laptop with a fast internet connection.