Better Skip the Aftershave: An SML Review of “The Devil Bat” 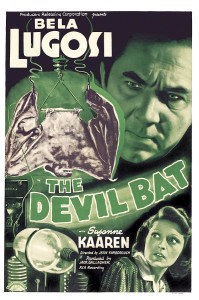 At a running time of only 68 minutes, this low-budget film from 1940 wasted no time with plot setup, so we’ll waste none of yours.

A text card after the opening credits of The Devil Bat revealed the backstory for the film. The town’s personable scent scientist and (apparently) medical professional, Dr. Paul Carruthers, was royally screwed out of the riches resulting from a perfume he invented. He has sworn revenge against the Heath family, local cosmetics magnates who have prospered from sale of the scent. Now, unbeknownst to the townsfolk, Carruthers is conducting bizarre and dangerous experiments in his basement. Experiments like using electricity to artificially enlarge his pet fruit bats. 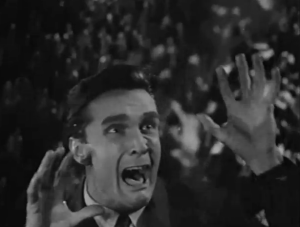 Bela Lugosi plays the delightful (and unequivocally un-Scottish) Dr. Carruthers. In response to his loss to the Heath family, he’s conditioned his bats to hate the scent of a new aftershave he’s concocted—enough so to attack anyone wearing it. It makes no difference that the Heath company heads have a $5,000 check with Carruthers’ name on it. The doc has already firmly committed to the “mad” in mad scientist, so he goes through with his diabolical plan anyway.

What follows is a series of attacks, interspersed with the newspaper headlines and rolling presses all too common in low-budget films of this era. A reporter and his photographer race the police prove the bat’s existence and stop the attacks. Meanwhile, characters keep visiting the doctor one by one for sage advice and insight into the case. The doctor, in turn, has them each try the new aftershave lotion he’s developing. Each conversation ends with the characters slathering themselves with the aftershave and leaving with a pleasant, “Good night, Doctor.” To which the doc always responds, “Goodbye,” in his quintessentially Lugosian way.

In the end, the film ended just as swiftly as it began. Carruthers’ downfall was inevitable but fans of Lugosi will enjoy seeing him before his own decline. If you have an hour or so to spare, check out The Devil Bat on Amazon Prime. 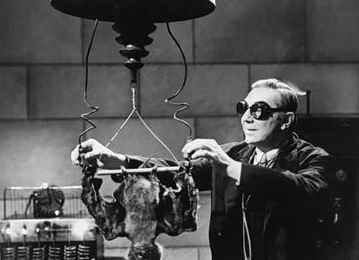