Animal Husbandry at its Finest: An SML Review of “Black Sheep” 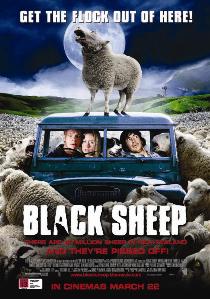 If horror movies have taught us anything about the world, it’s that nature is terrifying. And you shouldn’t mess around with it.

Seriously. Don’t do it.

Seriously. Don’t do it.

Unlike the 1996 Chris Farley/David Spade comedy of the same name, 2006’s Black Sheep doesn’t feature a cameo by an iconic grunge band. But it does have its fair share of uncomfortable family moments and dangerous encounters with wildlife.

Henry Oldfield is a big-city IT tech with a childhood phobia of sheep. After his brother, Angus, calls him back to their family sheep farm to sign away his share, Henry gets caught up in the results of a GMO protest gone wrong. Experience and Grant are at the farm’s secret agricultural lab to get evidence of genetic engineering that breaks local regulations, ethics, and the laws of nature. When Grant bumbles the theft of one of the lab’s discarded sheep fetuses, he inadvertently infects himself and the entire local sheep population with spontaneous cellular changes that turn them into bloodthirsty ruminant killers. 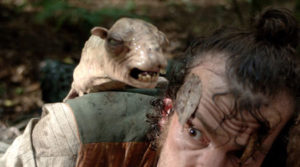 In a nation of 3 million people and 60 million sheep, that doesn’t bode well for our intrepid heroes. Quickly enough, killer sheep are everywhere—causing mayhem, eating the hired help, turning people into killer human-frankensheep hybrids, and driving trucks off cliffs. But to be fair, even genetically modified sheep don’t know how to use brake pedals.

Will Angus’s sick idea of animal husbandry bring down the family farm? Can Henry and Experience battle the frankensheep with only an aromatherapy candle and a limited supply of mint sauce? Can we get a full refund on the plane tickets for our upcoming trip to Wellington?

You have to watch to find out.

If you like your creature features to have an undercurrent of humor along with their incredulity, bestiality, and gore, then Black Sheep should hold a top spot among your DVD collection. Buy your copy today on Amazon.