Wallace Krebs is an amputee actor who is quickly building up his IMDb credits. In the past three years, he has appeared twice on the popular TV series The Walking Dead, and on Army Wives and Homeland. Wallace makes his way around film sets, as well, serving as associate producer, production assistant, still photographer, and more on a number of video shorts. Asheville-based zombie fans can see Wallace from June 6-8, 2014 at the GeekOut popular arts convention.

Q. Tell our readers a little about what it’s like to be an amputee actor?

It’s really a lot of fun! I usually get the call when they need someone to lose an arm, or simply portray an amputee, on camera. I’ve been a zombie a few times, a bomb victim, and a military veteran, just to name a few.

Q. What is a day like on the set of The Walking Dead?

It’s amazing! The creative teams go through a lot of effort to make the sets look as realistic and post-apocalyptic as possible. I’ve only worked two days on that show, so far.

It generally starts with a very early call time. You check in, head to wardrobe, and then makeup. The special effects team takes a little longer since they are applying makeup to both my face and missing arm. From there, you report to set where they give you instructions for the scene and you work through multiple shots. Lunch is interesting, since you try to eat carefully without destroying the makeup, but quickly so you can head back to set. You work through a few more shots or wait it out if you’re not in a particular shot. After wrap, you head back to makeup to have everything removed, then to wardrobe to return the costume, and then sign out for the day.

I also had a funny exchange on set with Andy Lincoln. You’ll have to ask me at Geek Out for the rest of that story. 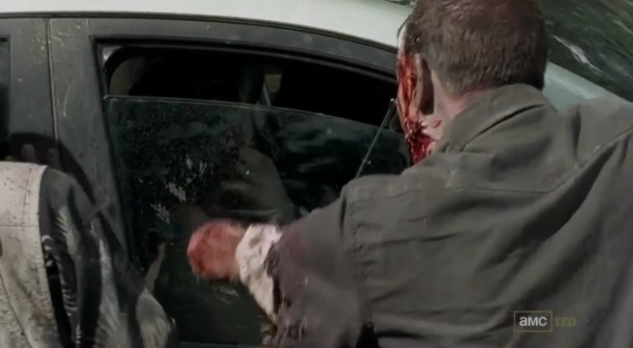 Well, I wasn’t a survivor very long. Dr. S made sure of that! The prison scene was definitely easier since all I had to do was lie on the cot the whole time. But there is something primal about playing a walker. It was a lot more fun being a walker!

Q. When the zombie apocalypse occurs, what are the first three things you would do?

Oh, this topic comes up a lot! In any disaster, there are three basic necessities: food and water, protection, and shelter. Finding water is most important. Then, you need to find a way to protect yourself. I would probably try to find a katana like Michonne’s. Ammunition runs out and makes a lot of noise, which could attract the wrong attention. For shelter, I’d probably head away from populated areas. An island would be ideal! 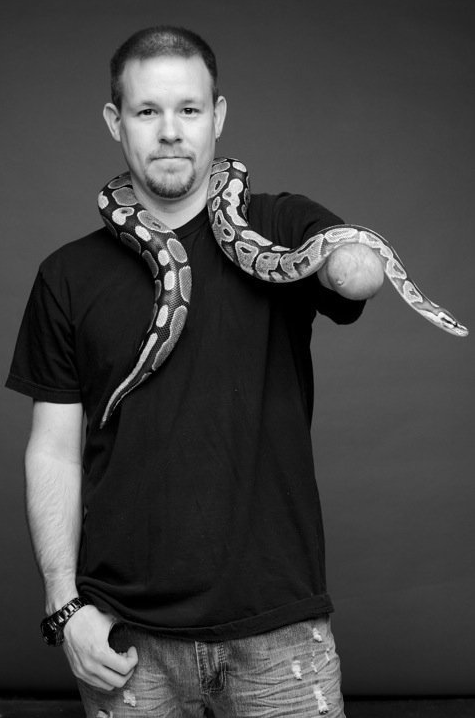 Q. Tell us a little about your part in the show Homeland.

That is another great show with a talented cast and crew. I worked multiple days on that show, but I assume you’re referring to the bombing scene. I portrayed a bomb victim that lost an arm. They applied prosthetic makeup to the side of my face and my arm to make it look like I took the brunt of the blast on that side. The makeup was very realistic. The set was a park that had been dressed with debris, body parts and gallons of blood. It was really more gruesome in person than what they showed on the episode, surprisingly.

Oh, I also had an awkward moment with Mandy Patinkin, but someone will have to ask me at GeekOut for the rest of that story.

Q. What can we expect when you appear at GeekOut in Asheville, NC this June?

Hopefully we’ll all get together and discuss our favorite shows, characters and scenes. And generally have a lot of fun! That’s what I’m there for – to make sure the attendees are having fun.

Q. If you could meet anyone in the world, alive or dead, who would it be and what would you say?

There are too many people I’d love to meet or work with. I’d try not to geek out (ha, see what I did there?) and would probably just say, “Sup?”

Thanks for asking me to be a part of your website. This was fun! I’m working on a new website over at AmputeeActor.com where you can find out more about me! Thank you!

For more information about Wallace and what he’s up to, check out his new website or his page on the Walking Dead Wiki.