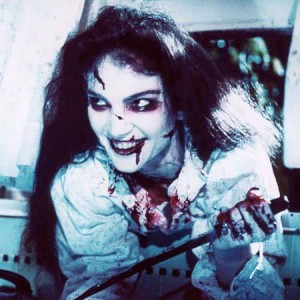 Brinke Stevens is an active actress, screenwriter, and producer, with credits in over 100 sci-fi, fantasy, and horror films, including “Haunting Fear,” “The Slumber Party Massacre,” and “Teenage Exorcist.” Stevens is popularly known as the Scream Queen, and was even the subject of her own Jeopardy question. Stevens has studied several foreign languages, and holds a Master of Science in Marine Biology from Scripps Institution of Oceanography.

Q. Brinke, what are you up to these days? 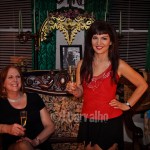 on the set of “Jonah Lives”

2011 has been an amazingly busy year, with almost a dozen film shoots! Among them, I’ve played

a murderous party-girl in “Jonah Lives” in Boston, MA

a school teacher in “The Night of Something Strange” in Richmond, VA

and a powerful demon in Joe Hollow’s “Disciples,” along with Debbie Rochon, Linnea Quigley, and Debra Lamb.

As well, several new movies of mine have recently been released, including Dave Campfield’s “Caesar & Otto’s Summer Camp Massacre,” Joe Castro’s “Summer of Massacre,” and Jason Paul Collum‘s “Shy of Normal,” plus his Scream Queen documentary “Screaming in High Heels.” 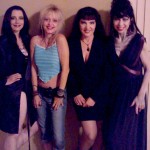 Q. What is actor Michael Berryman really like?
Despite his unusual appearance, Michael is such a sweetheart!  A very kind and gentle man who cares greatly for animals; he’s even run a wolf shelter. But he enjoys playing up his horror aspect (as we all do)… I remember on the “Haunting Fear” set, just before my near-naked autopsy scene, I muttered, “I hope your hands are warm” and he creepily intoned, “I’ve kept them in the freezer all day!”

Q. Describe your fans to us? What would you like to say to them?
Horror fans are the absolute BEST! They are incredibly kind, supportive, and very loyal over the years. So many of my fans were about 10 years old when they first saw my 1980s slasher movies. Many of them have since grown up to become horror filmmakers themselves… and now they all want to work with me! I’m so very grateful for their continued interest. 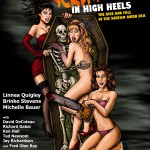 Q. If you’re being attacked by a masked killer, would you run upstairs, into the basement, or outside to the woods? Why?
I’d go wherever the deadliest tools might be, which is probably the basement. I’d grab pruning shears or some such, hide in a corner, and kill the sucker when he comes down the stairs.

All my best,
Brinke