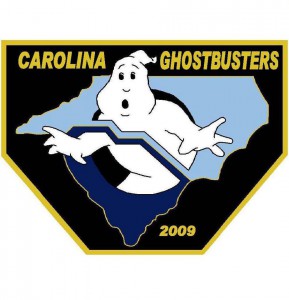 The Carolina Ghostbusters keep the Carolinas safe from ghosts, ghouls, spirits, specters, spooks, and the occasional demon. Their team of expert paranormal investigators travel around in their custom built Ectomobile to “bust some heads” and meet with fans at parties, parades, charity events, and other functions. The Ghostbusters and Ecto-1 will be at GeekOut in Asheville this June 6-8.

Click here to see our first interview with Dr. M. Doc Geressy, Captain of the Carolina Ghostbusters, from December 2011. Click here for more interviews with GeekOut guest presenters and additional information about the event itself.

Q. What have you guys been up to since the last time you visited the SML Haunted Mansion and Blog Laboratory in December 2011?

2012 and 2013 were two of our busiest years since we started in 2009. In the last two years, we’ve spent over 150 days on the road at over 100 different events from Bristol, Tennessee, to West Palm Beach, Florida. We just celebrated our one-year anniversary of our podcast, the Sci-Fried Eggs. We started the podcast to interview and share all the cool stuff, the great stories, and awesome people we meet in our travels. Margot Kidder (Lois Lane from Superman) nominated herself as our surrogate grandmother. And we got meet Ernie Hudson and add Winston’s signature to Ecto-1!

Q. How is Ecto-1 doing these days? We’re looking forward to seeing it at GeekOut in Asheville, NC, June 6-8.

Ecto-1 is doing great. We just rolled her over 46,000 original miles recently, which means we travel about 6,000 miles a year with her. She has a big brand new (for her) Sterling Model 30 Sirenlite on the roof rack. And that siren is deafening. And she’s had some tender, loving care and cleaning as the crew recently took a weekend to detail her for our upcoming busy summer convention season. 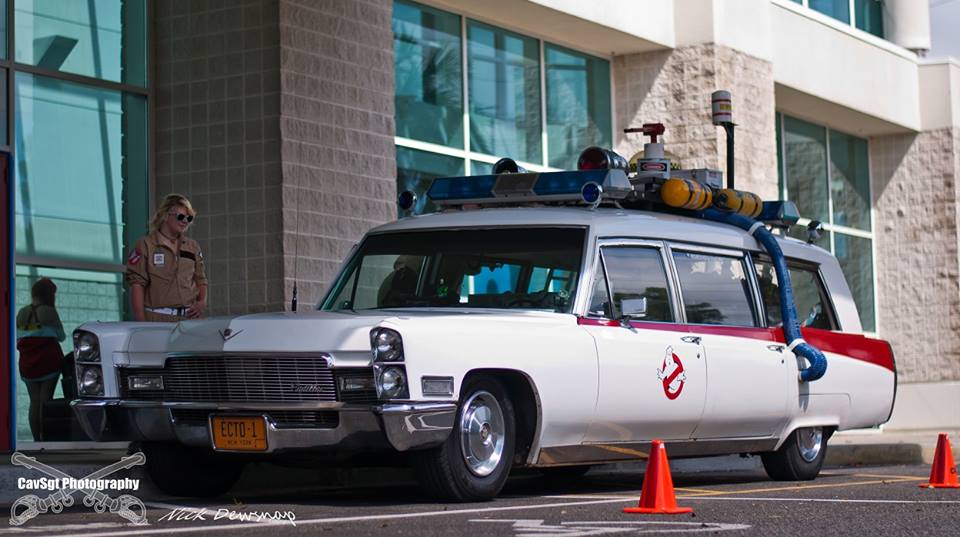 Q. You are in charge of the horror and paranormal tracks this year at GeekOut. What can attendees expect this year?

We have been doing conventions all over the southeast for 5 years now, and in that time we have been part of a lot of panels and programming. And we take a lot of notes of the good and the not-so-good. So, what we have created for GeekOut is a Paranormal/Horror Track that is a lot of fun and entertaining throughout.

It’s not going to be a lot of the same panels over and over with different names. Every part of our programming is different. And there is a little bit of everything for everyone. We talk about horror costuming. There’s going to be a “30 years of Ghostbusters” panel with Maurice LaMarche. We’ve got a great panel with the guests from The Walking Dead. A debate panel where the audience can get involved about whether or not Bigfoot exists. And of course SML will be talking all about vampires that don’t suck.

We’ve also incorporated some entertainment panels as well, including a live broadcast of the Sci-Fried Eggs Podcast where the studio audience will get to see how the show is recorded and all the pieces that go into making the podcast work. And a panel called Mystery BatDoc Theater Across the 8th Dimension where @BatDoc and @RealChuckCarte riff on the classic horror film Girlfriend from Hell! It’s all guaranteed to be a lot of fun!

Unfortunately, a lot of the paranormal investigation side of things we do is classified and confidential. However, we did investigate a theater in Charlotte that had some pretty interesting activity. And we also were called in to do some research on some UFO sightings over Lake Wylie in South Carolina. UFOs don’t quite qualify as ghosts, but they are part of the paranormal.

Q. You met the man, Dan Aykroyd. Did he give you any advice when encountering the unknown? 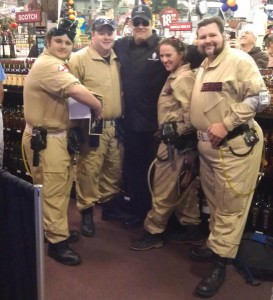 He didn’t give us any advice on encountering the unknown, but he did love the car.

Meeting him was very surreal. We had arrived early to get in line for the signing. We had Ecto parked out front and when Dan arrived he called our entire crew up to the front of the line. He walked out from behind the table and got pictures with us and signed stuff for us. Then after the signing, they had us park Ecto by the Crystal Head Vodka truck and Dan came out to sign the car. They brought him out of a side door, and when he saw the car, his eyes lit up and he smiled like a little kid at Christmas. He got some pictures with us and the car, and then asked all kinds of questions about it. He loves the old cars and is so excited that people are giving these old professional cars a second life as Ghostbuster cars.

Q. Harold Ramis was such a big part of the Ghostbusters universe. How has his passing impacted the Carolina Ghostbusters?

Harold’s death was a big surprise to a lot of people, but we had been keeping up with things. He had been sick for about 4 or 5 years and had gone through a lot of ups and downs. It’s always tough to lose someone who is that much of a key player in a franchise, especially when you love something as much as we love Ghostbusters. It’s like one of our really funny uncles died.

Q. If a ghost shows up to terrorize GeekOut, can we count on you to bust it?

As long as someone is going to pay the bill, sure, we’ll bust any ghost that shows up. However, if they don’t want to pay, we can put the ghost right back in the convention center.

Well, we are going to give SML the official scoop.  We haven’t told anyone else about this yet, so you are the first.

For about a year now, Captain M. Doc Geressy and Chief Mechanic Brandon Echols, the two guys who brought the Ecto-1 to life, have been working on their next project…the 1987 Ford LTD from Men in Black!  It is in the final stages of production right now and will be making its first appearance at ConCarolinas May 30 through June 1, and is also scheduled to be on display at HeroesCon June 20-22 in Charlotte.

You can find out more about the car and the new group under the FBMiB tab on our website CarolinaGhostbusters.com. And also, don’t forget to friend us on Facebook and follow us on Twitter @NCGhostbusters.

Don’t miss your chance to see the Ghostbusters and Ecto-1 at GeekOut in Asheville, June 6-8, 2014.