Q. First of all, tell us about Doktor X, the project in general, and what you have in store. We love spoilers!
Doktor X is kind of an homage to the 70’s sci-fi / secret agent movies I grew up with. I don’t know how, but growing up I tended to like a lot of British and Italian comics and shows. The story line so far is, Doktor X wants to know more about his mysterious benefactor, Order Lord. A lot of the things we see aren’t always what they are, and Doktor X feels that in his gut. I’m starting a new story line now that involves serial-killing robots, mutants, and a robotanist who has a familiar brain in a jar.

Q. What have you found to be the biggest challenge in creating your own online comic?
I think the biggest challenge in doing an online comic is not only getting the word out, but also being able to shout over the millions that are out there. Promotion is easy because we have the world at our fingertips, but there is such a deluge of people who DIY, it becomes muddy if you’re one that they want to follow. 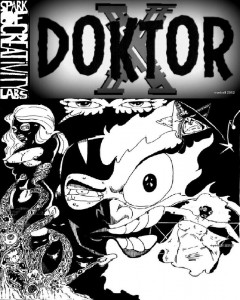 Q. We first met at the Mad Monster Party con in Charlotte. Do you get to travel often for your work?
The Mad Monster Party was my second Con I’ve been to [as a vendor]. The first was ACE (Asheville Comic Expo). I plan on being at ACE again this year, MMP next year, and if I’m lucky, HeroesCon next year, as well. I love conventions, I’ve been to half a dozen the last few years, I plan to stay local for now. But you never know…

Q. What artists – of any media – have influenced you the most?
My main influences on my work are, (in no particular order…) Jack Kirby, Moebius, Tim Vigil, Steve Mannion, Vaughn Bode, R. Crumb, and Richard Corbin. I devour any Italian or French artist also.

Q. If you could meet anyone in the world, alive or dead, who would it be and what would you say?
I think if I could meet anyone it would be Teddy Roosevelt. He just seemed like such a bad***. I would love to ask him what he would do today to deal with the world’s problems….

Q. If you’re being attacked by a masked killer, would you run upstairs, into the basement, or outside to the woods? Why?

If I was being chased by Jason, I always tell people I would use the “buddy” system. Just throw the killer your “buddy.” But I think I would hit the woods running and NEVER look back.

Q. What is in your Netflix/DVD/CD/Mp3 player right now?
Movies – I just tried to watch a bunch of stuff by Eli Roth. I’m still trying to figure out if he’s good and I just don’t “get it,” or that he’s terrible and I am truly right for not liking him.

Music – My MP3 player has everything from the blues to Slayer. I am a music snob. When I work on the comic, I tend to listen to things like Drone and doom stuff.

Q. Do you have a fan club/website/contact info where fans can reach you?
I have two sites that I can be contacted on: www.doktorxcomic.blogspot.com and http://www.facebook.com/DoktorXcomic. The Facebook site will have some merch soon so people can order from there. The Blogspot is the online comic.

I hope this helps, I tend to ramble, and I hope to see you guys this Fall at ACE!

I’m sure we’ll see you there, too. Until then, we look forward to seeing more from Doktor X. 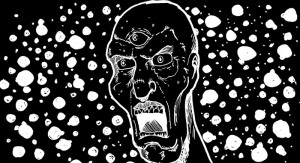