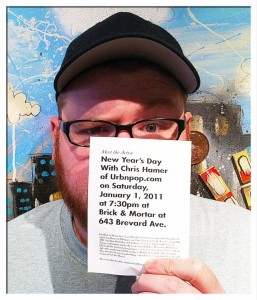 Chris Hamer is an Atlanta-based artist who creates original art, recycled paintings and sculpture, toys, and comic books. His work has appeared in a long list of group and solo exhibitions. He and his monster mascot Byron have appeared at numerous conventions and festivals, including Dragon Con and FX International in Orlando, FL.

Q. First of all, you’ve been to an awful lot of comic conventions. Which one has been your favorite, and why?

That is a tough question to answer, because they all have different moments that make them amazing. So with this being said, there is not really one favorite, but I do have a couple that are stand out shows, like Megacon in Orlando, FL. First off, this was my first big convention I attended as an artist, so its got that sentimental value to it, but besides that, I do this show with my artist friends Mike Groves and Scott Blair, so its not like work at all, its more of a vacation.

Then there is the show you guys have in Asheville called Fanaticon which has been mind-blowing with the way it is run and the support that the town gives it and the artists there. To see something like that makes me smile. At the end of a year, I look back at all the shows I have done, and just realize, how lucky I am to be doing what I do. 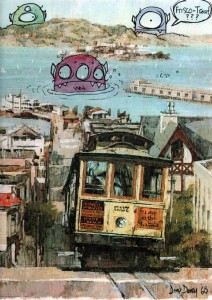 Q. I love your recycled art. Tell us a little bit about what inspired you to recycle old art, and where you find your pieces.

There are three things that led to this happening. The first was I was just getting in to the convention scene and knew right off I did not want to just have another drawing of a superhero or villain (not that there is anything wrong with that). So I was playing around on the internet and came across this artist in LA that had painted a space ship in the back of an old painting, and I thought that was super neat.

Flash forward a few months, I was planning an art show in Atlanta, and I thought it would be a neat idea to ask a bunch of artist to all recycle old thrift store paintings. Then through good ol’ trial and error, one day I doodled this monster in my sketchbook and it was like a light bulb went off.

The second thing that happened was, I have always felt that art should be affordable. With that being said, I also understand that the need to feel your time is valuable is important, but in my mind I knew there was a happy medium with both. So when I started doing the monsters on thrift store paintings, I found out that the old paintings and photographs are more affordable than working on canvas, and that with putting one of my creations in a pre-existing background that a lot of my time was not taken up. So when I put the two together, I knew that I was on to something that not only makes me laugh, but is affordable and different than just another superhero.

The Third was, I think art should be funny and serious all at the same time. There is no reason why you can’t laugh at your friends, society, or just yourself sometimes. 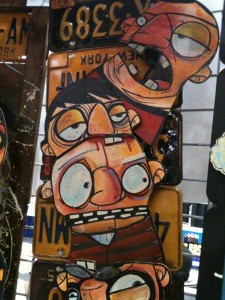 Q. What’s your favorite medium to work with and why?

I love old junk – the gnarlier, the more rusted and beaten, the better for me. I can sift thru old antique stores or junkyards for hours gathering stuff that at the time I might not have a clue what I’m gonna do with it.

I love the process of elimination, where when I start working on a new piece I have all this stuff around me in tubs and boxes and I just start working on something and as I’m going, see what I can add to make the piece come alive or make me laugh…

Q. When and where did you meet “Byron” (your one-eyed monster mascot)?

Byron was one of those creations that took shape over a year. He actually started out with two eyes. The first time I drew anything like Byron was for a flyer for an art show called Winter Solstice. I had drawn the image of Byron with the same horns and belly and look, but there were two differences, one was he was brown, and the other that he had two eyes. 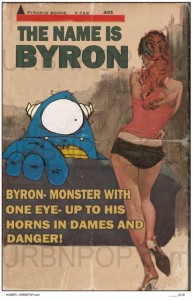 From that early drawing, it was like love at first sight. I remember looking at that drawing and thinking I just nailed it (but not knowing what it was). Over time, I had been working on what is now the way Byron looks and now he is every bit as perfect as I could want him. But it was just this past year that I realized where I came up with his name.

When I originally drew him, I just called him “Byron,” but I did not know where that name came from. I do not have any family or friends named Byron, there was no childhood friend or TV show that had a cast member named Byron, so I just assumed it was some name that I just thought up. Then I was on a trip to Florida, and in south Georgia I passed the town called BYRON. It’s funny how you can drive past something or a place for years and how over time certain things seep in your brain and stick.

So I’m now in this interview thanking the town of Byron for my friend and character.

Q. What is an average day like for an artist such as yourself?

Most mornings I get up around 7:30- 8, feed all of my fur-babies and start doing the business end of Urbnpop (checking e-mails, paying bills, Facebooking, all that fun stuff) then depending on what needs to be done, I spend the rest of the day working on art, or shopping around for stuff to make art out of. Then around 5 or 6, I stop and spend time with my wife and if something comes to mind that I need to do or want to do, I then start drawing again. But this time it’s not work, it’s me working on my hobby that happens to also be art. Then it’s more family time and then bed around 10 pm.

It’s crazy, because when I had a regular 9-5 kind of job, I would work a 40 hour week and just be drained. But now doing this full time, an 80+ hour week is nothing. It is truly an amazing experience to get to do what you love for a career (which I owe all to my wife for the encouragement to do this). 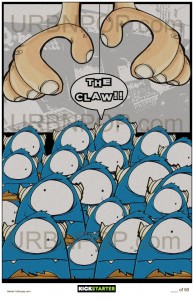 Q. If you’re being attacked by a masked killer, would you run upstairs, into the basement, or outside to the woods? Why?

Hurm…I think it would be the woods. I’m not really sure why. Except I do have delusions of greatness, and I think that if I was in the woods, that I could figure a way to capture him or get the best of him. You know, like build a pit filled with bears or lions to trap or kill him in?

But this is just what I think I would do. More than likely, I would scream and run around in circles waving my hands like a screaming Beatles fan. Hahaahah

I’ve been watching a lot of Cartoons right now, like “Adventure Time,” “Squidbillies,” and “Thundercats.”

On my iPod I always have Tom Waits or Something Heavy playing. One of my favorite bands to paint to is Damion Suomi and the Minor Prophets from Cocoa Beach, Florida.

Byron, of course. He is a combination of all the different ways people have described me.

The Byron Custom Figure/Toy will be available next year. Super stoked to have my first toy!