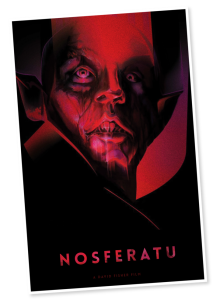 The iconically diabolical Count Orlock may soon be rising from the grave yet again if director David Lee Fisher gets his way. Fisher is the creator of the 2005 “film remix” The Cabinet of Dr. Caligari, and is currently coordinating a Kickstarter campaign to create a companion remix of the 1922 film, Nosferatu. Fisher recently spoke with me by phone about his vision, the Kickstarter campaign, and the possibility of a Doug Jones remix trilogy.

The idea for Nosferatu began a decade ago, after Fisher branched off from SEGA to start his own computer animation studio in LA. With nothing but a green screen, then-current technology, and a theoretical idea, he a small team of filmmakers created the Cabinet of Dr. Caligari visual remix. They scanned the original film stock, taking on an unexpected restoration project in the process, and combined it with green screen footage to create a “high-tech homage.”

These “sisters to the original films,” as Fisher called them, are more of a remix than a remake. They include sound and constructed dialogue, but since the new actors are overlaid onto the original sets, much of the original elements and sensibility still remains.

“It was a way to get really close to the original movie – as close as you could – while bringing a modern sensibility,” Fisher said. “It’s more about revisiting something great.”

I asked if the dialogue would transform the story, or if he was aiming for authenticity. “That’s a good question,” he said. “We definitely want to build something close to the original.” In silent films, actors gesticulate for minutes at a time, but only snippets of dialogue are shown on dialogue cards. “Those are the gaps we’re trying to fill in,” Fisher said. “The biggest challenge is that the acting is so very melodramatic. There’s a ton of subtext there, like a giant iceberg that you only see the tip of. The challenge has been to ride the line between modern acting and a melodramatic style. We’re hoping to approach it kind of like a classic stage play.”

But why choose two old German expressionist horror films to work from? Why not a silent film depicting a train robbery or Charlie Chaplin’s Tramp character?

“From a technology standpoint, [these horror films] were really important to the history of cinema,” Fisher said. Elements of the lighting and cinematography used for Caligari and Nosferatu influenced a host of films that followed. “But they were often dismissed because of their story and content,” he said.

A Monster is Born

Fisher always pictured making a trilogy of horror film remixes. But after the first experience in 2005, he was ready to give up after just one film. “That was a long time ago, but I don’t think we would have attempted it again until the last year or two,” he said. Even with the technology available at the time, the project was just too hard. Green screens made characters fade into the background, rendering took full days and nights, blocking was hard to match to the original sets that would be superimposed.

“It was almost like the silent era [of filmmaking] versus making a movie now,” Fisher said.

But recent advancements in rendering software, HR cameras, and real-time feedback have encouraged Fisher to try again. This time, though, the project will be bigger and better. “I don’t want to do the same thing just because it’s easier and faster. I intend to up the game,” said Fisher.

An example of the “remix” process

The biggest coincidence of the project so far may be Doug Jones’s connection. Jones, known for playing all your favorite prosthetics-covered characters – seriously, all of them – has been very open over the years about his interest in playing Nosferatu one day. I asked Fisher if he was aware of that, and if that was why he picked him for the project.

“I didn’t know [that he always wanted to play Nosferatu]. It actually happened very quickly. Once I came up with the idea, I knew there was only one guy I wanted to play the part. I know he’s a busy guy, and I was actually a little nervous when I called to ask.”I was thinking ahead already. A horror remix trilogy? Doug Jones in the first two films? Would he come back for the third installment? Fisher said he’d love to have Jones back for the third film, though maybe not under so much makeup next time.

“The thing about Doug Jones is that he’s so well known for being buried under 100 pounds of latex, but he’s actually a fantastic actor.” 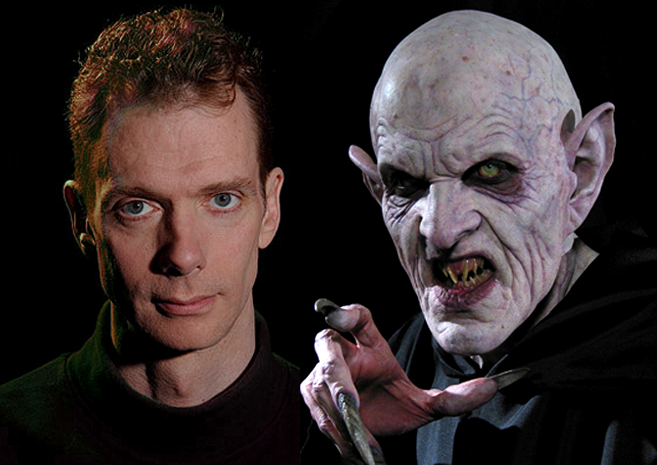 Can the Story Become a Legend?

In contrast to the “Hollywood type” that I was expecting, Fisher’s interest in talking directly was a surprise to me, since so many people prefer working remotely, communicating by email on their own time, and glossing over personal connections. But Fisher’s affability and interest in developing quality connections is a mark toward the type of project that he wants to create: one created for like-minded people and supported by those same people.

“I really believe there’s an audience like you, me, and all these wonderful people [who have donated already] – people that want something between Transformers 96 and another episode of Avengers,” Fisher said. “I really want to pick the right target for us, for our cinematic community.”

The Nosferatu remix has raised over half of their budget so far, but Kickstarter doesn’t allow projects to collect unless they meet the full goal.

“I really want to convey the fact that people who want to see this movie happen should donate. If we don’t get there [to the goal], there’s no movie…. It’s been a challenge to convert enthusiasm for the project into money. We’ve been working very hard to make sure everyone realizes we’re serious,” Fisher said. “That’s the thing about us – we finish things.”

Help the Nosferatu remix finish their Kickstarter campaign with full funding. Pledge your donation today and help this one-of-a-kind project come to fruition. We’ll see you on the other side of the finish line.