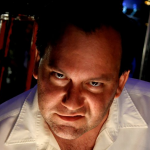 Sean Cain is a filmmaker from Northern California whose work has taken him to Texas and now Los Angeles. Cain manages Velvet Hammer Films with Jim Wright, and together they have created such films as “Silent Night, Zombie Night” and “Breath of Hate.” Cain’s skills and resume have led Fangoria to label him the “Indie Horror Specialist.”

Q. First of all, tell us how you became interested in filmmaking.

Back while I was still in college and taking film courses, I found that I really enjoyed editing. It was through a friend of a friend that I was introduced to Victor (“Jeepers Creepers”) Salva. At the time, he had only made one lower-budgeted horror film, but he became a mentor to me. My first “big break” was helping to edit a ghost story in his living room on a linear system – this was before Final Cut Pro and the like. That led to making my first film, “Naked Beneath the Water.” I saw through him [Salva] that filmmaking wasn’t rocket science. It was attainable even if you had very little money.

Q. You have served as producer, director, editor, actor, etc. etc. on various projects. What is your favorite roll to hold on set?

Well, my favorite role is editor, but that’s not on set so I guess then my second favorite is being a director. The head honcho, big cheese! I boss actors around and whip them if they get out of line.

In actuality, I haven’t liked the actual process of making movies. It’s usually super stressful and there’s always some B.S. that needs to get fixed. The only rewarding parts (aside from finally getting all that footage home and being able to play with it) are the few moments when the actors make magic. Then I’m engrossed and forget everything else – giddy with delight that I was able to capture something awesome. 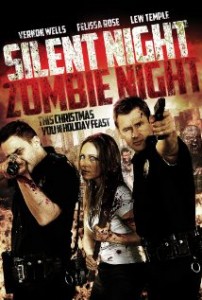 Q. What has been your most challenging film to work on thus far?

Well, each film has it’s own unique challenges, but I guess my second picture, “Silent Night, Zombie Night,” was the most difficult so far. We worked mostly 20-hour days, and quite often because we filmed in the winter months there was a lot of having to recreate daylight when the sun went down. I think my D.P., Jim Wright, did a fantastic job and it’s hard to tell, but something like that isn’t easy to pull off. When you are working on a low-budget film there just aren’t as many crewmembers there, so the few that are really have to dig extra deep to pull out the magic.

Q. It looks like you recently got into editing for television. Is there a difference between working on film projects and working for TV?

Well, most of the projects that are listed as “TV” on my resume are either Internet shows or stuff for late night cable. Really there is very little difference. To edit is to edit, whatever the format is. Each has it’s own “format” you have to abide by, but at the end of the day it’s about creating something interesting and watchable. 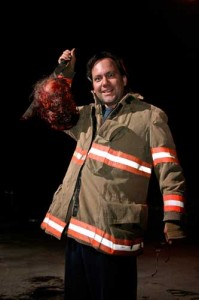 At one of my enemies’ house so then when we call the cops and lead them over there they would go to jail!

I listen to a lot of film music because I’m nerdly that way. It’s usually Bernard Herrmann, Jerry Goldsmith, or one of the composers that does stuff under the Hans Zimmer “name.”

Q. Did you ever consider another career? What was it?

My mom always said I should become a chiropractor. If I had listened to her I would probably be rich and barely working because I had to stay home to count all my money. Instead I make films. I guess my momma did raise at least one stupid child.

To learn more about Sean Cain, visit his website or IMDb page.