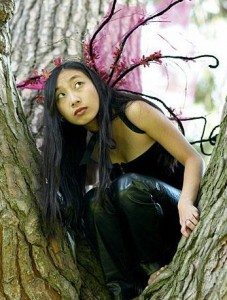 Shing Yin Khor is a privacy manager and monster sculptor living in Los Angeles. In addition to her art, she manages several webcomics and a small press publishing company. Khor has appeared at numerous expos and festivals, including Burning Man, Anime Expo, WonderCon, and Geek Girl Con. Her monsters – made from clay, fabric, paper, and wood – are available online through her website.

Q. First of all, where do you get your inspiration for all your creations?

The general gist of the Center for Otherworld Science and the Specimen 7 Collection is something that’s been mulling about in my head since I was in high school and obsessed with world mythology, fairies, and aforementioned historical hoaxes. I also used to scuba dive when I was younger (early high school), and I didn’t really realize it at the time, but that seems to have sparked a love of weird looking sea creatures, which has been surfacing in my work more in the past couple years.

Marlowe the Monster is more generally autobiographical, although not concurrently with my actual life, which is going quite well (certainly better than Marlowe’s).

The general things that my brain thinks about a lot are:

Eventually, all of these ideas do make their way into whatever I make, although some topics are more blatant than others.

Q. What is an average day like for a sculptor/publisher/webcomic creator such as yourself?

This is Monday, November 21, 2011, which seems to be a pretty average day. The sculpting only happens in the evening, so I’d recommend scrolling down.

It starts with my cat meowing loudly in my face (Gussss. Shut up!).

For most of my day, I’m at my day job. It’s a corporate desk job with a large media conglomerate, but I actually love the work that I get to do. It’s not creative/artistic at all, but it does intersect with one of my other, but much less talked about, interests, which is internet privacy (the consumer’s right to privacy, specifically). My business cards says “Privacy Manager,” but I’m pretty much a research paralegal/project manager/translator-for-lawyers.

I wedge in email replies, other internet miscellany, and packing and shipping packages in at various points during the day.

Alright, the rest of my day!

6:55pm: I leave work and head home. I pick up dinner materials.

8:00pm: Jason’s cooking today (I hope)! The cat is mostly not sitting on my work table (Gus! Get off that glue puddle!). I get to start some work. Yay! I pre-heat the oven. 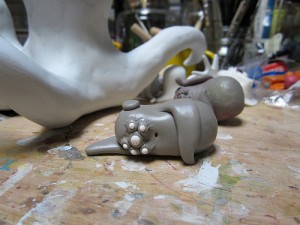 Here’s what my worktable looks like right now. There’s a Large Octopus Thing, that’s going to be a pretty neat sculpture someday if I ever get the shape right. Marlowe’s mostly done. I’m sculpting a new figure for this one.

8:49pm: Jason’s making a sandwich. I decide I want eggplant instead. Marlowe went into the oven 10 minutes ago. I love my oven. It’s an O’Keefe Merritt stove from the 1950’s. They’re hard to find – except in Los Angeles, because that’s where the original O’Keefe Merritt factory was. 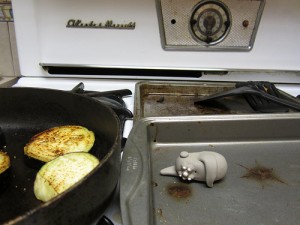 9:05pm: Marlowe’s out of the oven. My eggplant’s done. I eat it, with rice. I usually love posting pictures of my food, but this is really not a particularly attractive meal. You can see the burn marks on my baking tray from a previous tentacle creature.

9:15: I paint Marlowe. I doink around on the Internet a bit too.

9:42pm: Marlowe’s ready to photograph! I usually take about 20-50 pictures, assuming that there will be one where the lighting’s mostly right, the cat’s not in frame, and there’s isn’t too much lint on set. It’s a really easy shot today, though. 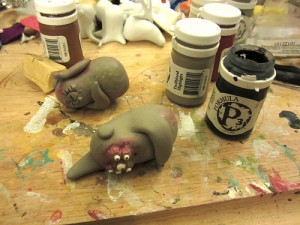 If I have any other work to photograph, I’ll do it now too (Today, I don’t). Today, I take 97 photographs of Marlowe, before I figure out the camera setting I need to use and the lighting I want. There’s no Marlowe set this week, so I get to be nitpicky about the lighting. Just an LED flashlight worked the best this time.

10:05pm: The boring, Photoshop part of Marlowe. There’s not a lot of Photoshopping this time around, so I pretty much just figure out exactly what the script is going to be now.

10:27pm: Marlowe is uploaded! Usually I make the comic on Tuesday, but there’s a lot less 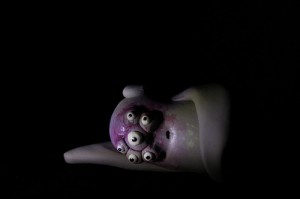 panic involved when I do it on Monday. I really, really try to do it on a Monday.

11pm-12pm: Time to sit on the couch and cuddle with my cat, and my sad, ignored boyfriend. Large Octopus Thing comes with me for sanding. I did some shop updates yesterday, otherwise I’d do them now.

So, that’s my day! It’s reasonably average for a day where I have no major deadlines looming. If I do, which I usually do, then I just…sleep less and work more.

Q. What is your definition of a perfect day?

A day where I have no commitments at all and no deadlines closer than at least a month away.

I’m not entirely sure what that day will consist of, but I think that some studio cleaning, a lot of sleeping and a fair amount of cake will likely feature quite prominently.

This is the part where I embarrassingly admit that I actually am terrified of horror movies and don’t watch any.

However, my good friend Cindy does a horror show podcast called Creepy Kitch. She also introduced me to Scott Leberecht, who bought me several drinks once, so you should check out this movie he’s written and directed, Midnight Son, which has been getting tons of acclaim at festivals and other places where people say things about movies. I haven’t watched it (aforementioned wimpyness), but I trust that Scott, who is wonderful, has unerring style and taste.

Q. Love at first sight, or love at first bite? Tell us about the first time you fell in love.

I’m pretty sure I’m saving that story for a depressing and heart-wrenching comic someday.

I’ve got a gallon of undiluted muriatic acid under the sink. That dissolves tissue, right?

(I use it for etching tin.)

I’m currently watching Inside Nature’s Giants, which is a BBC programme where giant animals get dissected. It’s amazing. There’s this one where they dissect a GIANT SQUID. It’s so cool.

Finding Radiohead’s “The Bends” in high school was the first time I ever realized that music was also art. Damien Rice’s “O” makes my heart and head want to explode, and Feist and Ingrid Michaelson have a habit of singing words that punch me in the parts that feel things.

Q. What’s the coolest thing about your life and what you do?

Holy crap, people want to give me money for my art? You’re kidding, right?

Somehow, I thought this question would be easier. A bear cub spliced with an octopus?

Oh, you shouldn’t give me open-ended questions.

Can we talk about Beowulf and heroic futility? So, Beowulf kills Grendel and Grendel’s mother, right? Now, Beowulf is sort of a dick, and doesn’t really talk much, but when he goes back to his men, he spends more verses that one would think necessary for a manly monster killing future-king talking about Freawaru, King Hrothgar’s daughter. She’s to be married off to this other dude to end a long feud, but Beowulf predicts that that’s gonna end in sorrow.

Now, after Beowulf kills Grendel’s mother, King Hrothgar offers him anything. Beowulf has saved his people. He’d get anything he asked for.

So, he takes this sword. Oh yeah, the sword later breaks on him while he’s fighting the dragon that kills him.

And – that’s it for Beowulf. Beowulf has no heirs. He is the end of his line. So, everything he’s done, he’s pretty much done for nothing. Technically, the peak of his career – what everyone remembers him for – was killing Grendel, way back in in the early years of his life. He’s still a legend, though.

Anyway, heroic futility. The sum of everything we do is probably futile, but it’s also probably still worth trying to be the best monster butt-kicking hero you can be anyway. I figure that one of the most important and oldest Anglo Saxon pieces of literature sort of agrees, so that’s good enough for me.

To learn more about Shing Yin Khor visit her website or check out Marlowe’s webcomic.