Tracey Birdsall is an active actress, producer, and screenwriter. From “Family Ties” and “All My Children” to fighting for Team Humanity in the impending robot apocalypse, Tracey has built an interesting television and film career. She’s going strong into 2016 with a couple sci-fi films: ROGUE WARRIOR: ROBOT FIGHTER, some of which was shot in the same dusty climes as parts of the Star Wars and Star Trek franchises, and AT THE EDGE OF TIME.

Q. First of all, can you give us your personal synopsis of your upcoming film, ROGUE WARRIOR: ROBOT FIGHTER?

ROGUE WARRIOR: ROBOT FIGHTER is a science fiction film set in the distant future depicting the overthrow of humanity by artificial intelligence on Earth and other worlds. I play the lead role of Sienna—a rogue warrior trying to stop the AI. She also has some inner struggles that she’s dealing with, which make her character really interesting. Her character has some very challenging issues, which make not just the physical journey enticing, but also the psychological aspect of her journey. Imagine going to various worlds and machines run them all… although man developed the technology that created them. It’s a frightening glimpse into an alternate future reality of humankind. 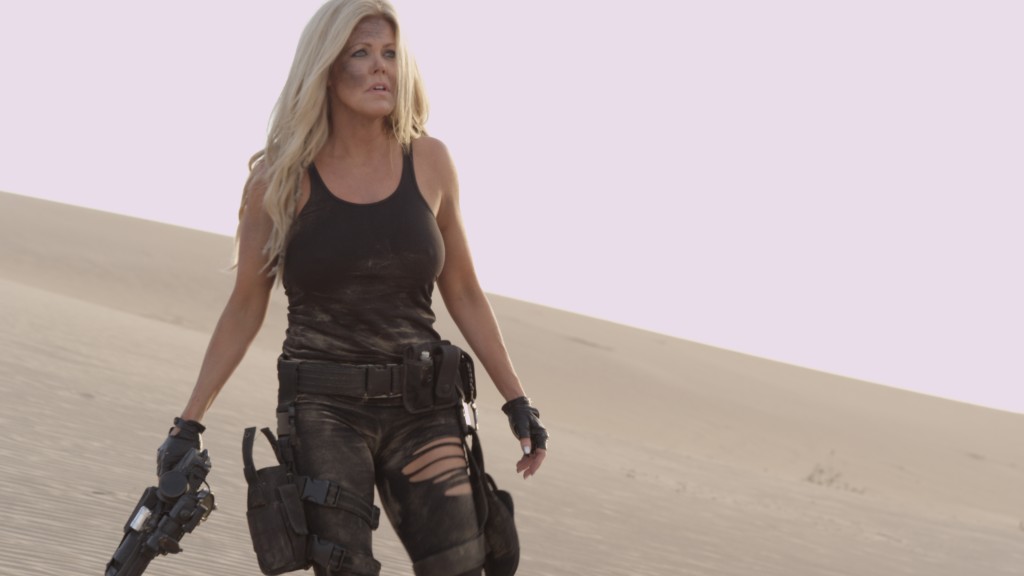 Q. ROGUE WARRIOR: ROBOT FIGHTER was shot in several of the same locations as the original Star Wars films. Were you able to channel the Force to get into character?

I would have to say that shooting in some of the locations of both Star Wars and Star Trek was somewhat inevitable as they represented “other worlds.” There was certainly some adrenaline in that knowledge; however, when I’m shooting I’m living that character’s life… I think about little else. From the moment I start shooting, I’m thinking only the thoughts that that character would think. It has to be real to us in order for it to be real to the audience.

Q. You served as actress and producer on this film. Do you enjoy working on screen as well as behind the scenes? Which do you prefer?

I would have to say that I love the whole process. Producing is very much like putting the pieces of a puzzle together, a puzzle that varies. I produce leading up to the shoot and then I succumb to my character once shooting begins. It’s very important whom you’re producing with (in this case Neil Johnson) and whom you surround yourself with (cast and crew) when you produce and also are one of the characters. It’s a delicate balance and you have to set yourself up for success (i.e., no drama queens) in that situation.

Q. Over the past few years, your career has moved more towards action-oriented roles. What has been the biggest challenge for you in your sci-fi roles?

I am an action-oriented human being, so I was eager to use more physicality in my roles! I work every day on my fitness and my healthy eating habits just as a way of life, so I think it was a natural progression for me. I love doing the action myself, although the endurance level required was even greater than what I had imagined. Luckily, I never question directors—so when he says, “let’s do it again”, my brain just does it—it’s my programming! What I under-estimated was the amount of calories I would have to consume! I ate everyone’s leftovers (true story and completely without shame).

The biggest challenge was fighting the natural elements as we were at one point out in the desert (Yuma) in raging winds—and oftentimes in various deserts in grueling heat. Imagine being in raging winds in the desert… every pore of my body was filled with sand. My eyes (Sienna couldn’t wear sunglasses) had granules of sand in them for almost two weeks, my ears, my mouth, it was wild. With the heat, I oftentimes had 50 or so ice cubes shoved in my clothing – which would melt in about 5 minutes. Those same elements that made it so challenging, however, are also what gives the film real grit. It’s beautiful in that way.

The other challenge was pushing through with injuries, which is also inevitable. Swollen knees, scrapes and cuts, and tremendous bruising (one day I counted over 100 bruises). Luckily, I photographed my injuries and now am considering making it a coffee table book with back-story. I think it would be humorous and enlightening! “War Wounds.”

Q. We’d buy a copy of that book. The film’s director, Neil Johnson, is known for his sci-fi work. Was he able to offer some guidance on how to manage an artificial intelligence uprising?

Well, of course he’s a real pro on how to do this stuff, so he offered guidance throughout the entire ordeal. Apparently, according to Mr. Johnson, the secret is in understanding and dominating them first and integrating artificial intelligence into humans… becoming more machine than man.

Q. No spoilers, but can you tell us a little about how ROGUE WARRIOR: ROBOT FIGHTER sets the audience up for the remainder of the series? And how long will we have to wait in anticipation between films?

ROGUE WARRIOR: ROBOT FIGHTER is essentially the backstory for the upcoming series, THE GODS OF WAR, which will be produced next year.

Q. Who do you have your money on winning the robot uprising: humans or the AI?

Isn’t that the question in real life?! Man develops and designs robotics that are capable of running more than man himself (and even begins to make them think for themselves). This is reality and we depend upon machines more and more each day. The real question is: how does that end?

Q. Who is your favorite tv/movie robot?

Having been interested in robotics since a very young age (my parents ran Powercon, the largest Power Electronics Convention in the world, so I was exposed to thousands of engineers and their latest discoveries on a yearly basis), I have appreciated and enjoyed almost every robot throughout the years.

I would have to go with WALL-E, C-3PO and R2-D2, Johnny 5, and Robby the Robot. When you love robots, it’s really hard to pick. After the last film, ROGUE WARRIOR: ROBOT FIGHTER, it’s Hoaglund for sure… but you’ll have to wait for that to come out to see why!

Q. You have several projects currently in the works. Is there anything else you’d like to talk about that we failed to mention?

One of my favorite things in this life is running back-to-back roles within different genres. Although science fiction has rapidly become my favorite genre, I also have a hilarious comedy coming out at the end of the year entitled WHO’S JENNA…? where I play a lawyer who is a doppelgänger for Jenna Jameson. The cast and crew were phenomenal, as was the script, so I’m very excited to have that released about the same time as ROGUE WARRIOR: ROBOT FIGHTER. Other projects I’m in that will be released soon thereafter are AT THE EDGE OF TIME which is a science fiction time travel film [also] by Neil Johnson, and DIARY OF A FAT MAN (directed by Steve Ravic) which is also a comedy film – produced in Australia and the U.S.

Tracey, thanks so much for your time. We look forward to seeing ROGUE WARRIOR: ROBOT FIGHTER when it comes out and hearing more about your other projects. 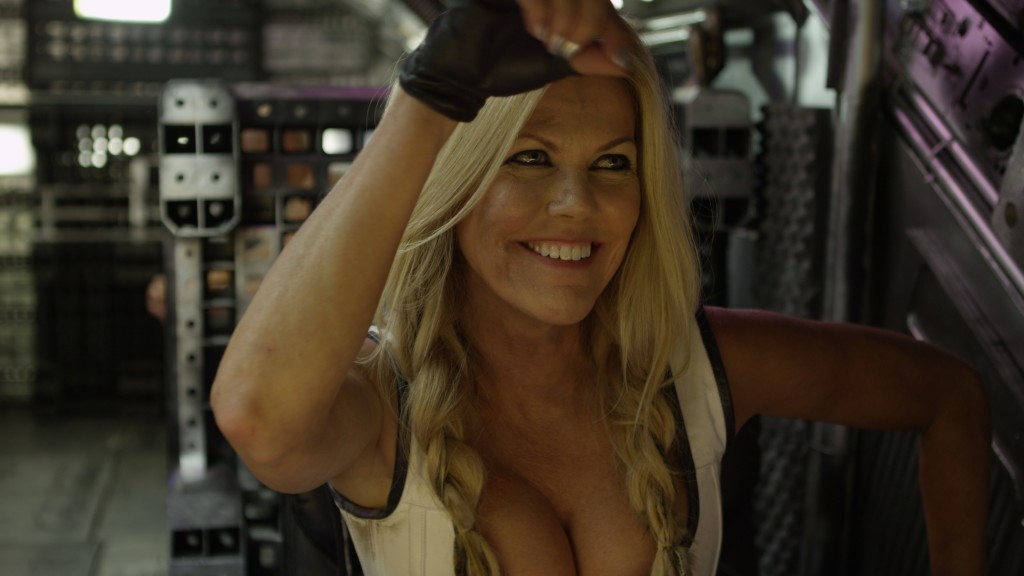