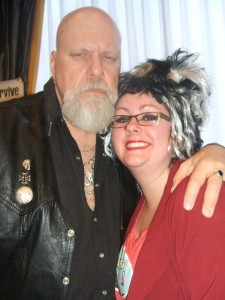 R.A. Mihailoff is a lifelong horror lover and longtime horror actor. He is best known for playing the title role in “Leatherface: Texas Chainsaw Massacre III,” and is more recently recognized for his head-splitting role in “Hatchet II.” Mihailoff recently appeared as a guest at the second annual Mad Monster Party convention in Charlotte, NC. He was kind enough to grant SML an impromptu interview while at his popular autograph table.

Tell us a little about your experience on the set of “Leatherface: Texas Chainsaw Massacre III.”

The experience was totally great. It was just a whole lot of fun. It doesn’t matter what type of project – film, TV, commercials – it was just the best work situation in the world. In my case, it was very gratifying because I’m a lifelong horror fan.

Was there a single movie that inspired you as a kid? One film that stood out and made you love horror?

It’s hard to pick just one film. I loved all the Universal monsters – Dracula, Frankenstein, the Mummy. And “Chiller Theater”! It was a Saturday tradition at my grandmother’s house to stay up late and watch “Chiller Theater” and all the great horror classics.

Do you think horror is the best movie genre, or is it your favorite just because of the great memories?

No, I am a lifelong horror lover. When I was a kid, one of my friend’s dads was a mortician. We used to ask him for mortician’s wax to make movies with. We’d get the mortician’s wax, and an 8-milimeter camera, and go out and spend the afternoon making our own spooky movies. Usually we’d be in my granddad’s barn – that was the set of many of our movies.

Leatherface is a character that’s always shown in a mask. What did you do to make the character come through the mask? Did you have to change your acting style at all?

No. No one could have predicted that.

Was it difficult to come into a series in the middle, after the character had already been developed by another actor? Did it make it more difficult to create a character of your own?

It was easy to pick up the rhythm from the first movies. It’s always best to be the one that creates a character, but it’s not bad to take one over, either.

Sight. Usually you see people before you bite them, right?

Unless you’re both in the dark… Do you have any new projects in the works?

There is something that I’m in talks with, but I don’t want to talk about it. I’m superstitious, and I’d just rather not say anything until the details are worked out.

Sure, I get it. Can you at least tell us if you have any big plans for Halloween this year?

Yeah! I hope to be touring the nation, doing things like this. [Mihailoff motions around at the convention crowd.]

I can tell you’re really in your element here. You seem to really enjoy meeting the fans.

Oh, sure. If you don’t like it [working the conventions], you shouldn’t do it. I enjoy traveling and meeting people. I’m hoping that by the end of the year I’ll be hither and thither and yon.

SML wants to thank Mr. Mihailoff for the interview. To learn more about Mihailoff and his work, click here.