Cookie Monster was called before Congress today in response to allegations that he is a “gateway monster.”

The special interest group Moms and Dads Against Monster (MADAM) has called for all gateway monsters to be banned from family television. They maintain that gateway monsters, like the Cookie Monster and commercial star Count Chocula, corrupt young children and encourage them towards ghoulish lifestyles as adults. Cookie Monster has been the initial target of their fight.

Cookie Monster appeared this morning before the Senate Subcommittee on Un-Human Activities. In response to MADAM’s allegations, Cookie Monster said, “Me not trying to corrupt children. Me only want cooookies.”

A second hearing has been called for next Tuesday. Cookie Monster will appear before the whole Senate.

This story follows last week’s accusation by MADAM. Stuff Monsters Like will bring you more information as it becomes available. 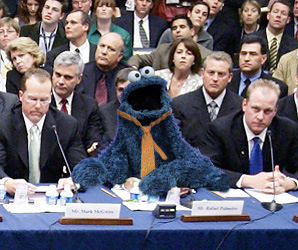