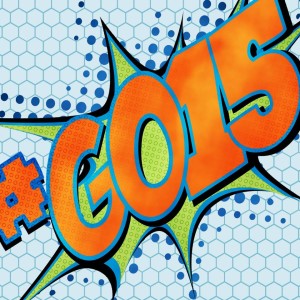 Stuff Monsters Like is once again gearing up for an exciting GeekOut weekend in geeky Asheville, NC. If you followed our advice, you have already purchased your tickets and are anxiously awaiting the opportunity to meet the great list of celebrity guests, including Dante Basco, Aurelio Voltaire, and Jon Bailey.

While you’re there, don’t forget to come by the SML table on the concourse. We have a very special scavenger hunt planned, and will have exclusive opportunities to have your picture taken with some of our monster brethren.

Saturday looks like a great lineup, but be sure to come back on Sunday. SML’s head monsters, Jimmy and Sarah have concocted an excellent interactive panel this year:

Parents know that there is no greater mystery than what goes on in a teenager’s mind. Are things going well at school? Do they have a crush? Are they planning to raise the dead? Non-parent presenters Jimmy and Sarah offer practical wisdom for parents whose teens may be dabbling in necromancy. Help shape the discussion by directing the turn of events in this choose your own adventure-style panel.

We think we’re the highlight of the weekend, but there’s also plenty to see besides our panel. Check out the official GeekOut press release below, and click here to see the full weekend schedule.

ASHEVILLE, NC — GeekOut 2015 will be held June 6-7 at UNCA’s Kimmel Arena, as well as other venues around Asheville. The fourth installment of “WNC’s Popular Arts Convention” will celebrate all aspects of pop culture, from film, television, and animation to costuming, comics, and stage performance.

GeekOut continues its perineal growth in the Asheville events scene after a successful transition to a weekend-long format in 2014. This year, local businesses, fan groups, and performers are making the lead-up to the convention even more spectacular with nine geek-themed performances and gatherings between May 30 and June 7 that are being called “Geek Week” by organizers.

“Everybody’s in on the act,” said GeekOut director Ken Krahl. “Geek Week wasn’t even something we planned. People kept coming to us with an incredible concert, party, or arts show for the week before the convention, and now there’s a themed event nearly every night that week.”

The convention itself features panels, workshops, and presentations for adults and children in the areas of Voice Acting, Technology, Gaming, Costuming & Make-Up, Animation, Paranormal & Horror, and Blogging & Podcasting (new for this year).

GeekOut will also feature vendors and artists from across the Southeast, combat and stunt demonstrations, live-action role-playing, and costume contests in adult, children’s, and group categories. Attendees will be able to explore and pose with fan-built replicas of famous cars from Ghostbusters, Back to the Future, and Jurassic Park.

“GeekOut is so much fun to put on, thanks to the way arts culture thrives in Asheville,” said GeekOut programming director Janae Elisabeth. “As much as conventions tend to celebrate the finished books, games, or movies, in a town like this it will always be about learning and appreciating the creative process behind the work.”

After-hours events, which are for fans over 21, include the return of Geektastic, a vaudeville-themed burlesque revue at Friday, and geek-goth virtuoso musical act Aurelio Voltaire on Saturday. Both shows are at New Mountain on N. French Broad, and begin at 9 PM. Admission to after-hours events are included in the GeekOut All-Access Pass, and tickets will also be available in limited quantities at the door for $18.

Tickets for GeekOut are discounted through June 4, with Weekend passes at $25 for adults and $5 for children 5-12, and All-Access passes (which include all after-hours events) for $50.