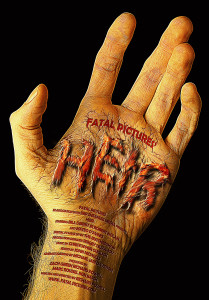 Producer Zach Green has a new film premiering this summer. Heir is the story of a father/son road trip gone horribly wrong.

Heir‘s actors and filmmakers have made frequent appearances on SML. Our minions try to keep an eyeball on all the latest horror news. We have previously reported on many of Bill Oberst, Jr.’s projects, including Circus of the Dead. You can also check out this review of Familiar.

Heir will premiere at the Fantasia film festival in Montreal this summer. Lasting from July 16-August 4, 2015, Fantasia attracts well over 100,000 attendees each year and is “widely considered to be one of the largest and most influential fantastic film festivals in the world.”

Here is the press release about Heir from Fatal Pictures, followed by a series of set photos. We’ll keep you up to date as more information becomes available.

FATAL PICTURES, in association with RED SNEAKERS MEDIA, is proud to announce HEIR – A touching tale of father & son from the filmmakers that brought you WORM, FAMILIAR, REMOTE & THE LAST HALLOWEEN. This practical effects horror short is a monster movie unlike any other. It is a bleak and fantastical examination of one of society’s darkest taboos that aims to stimulate the mind and wrench the gut with equal power.

After connecting with a stranger of similar interests online, Gordon and his young son Paul, embark on an ill-fated road trip in which Gordon aims to indulge a secret passion. Before the day ends a horrible truth will be uncovered and a harsh lesson will be learned.