Halloween Week 2018: Stretch Your Celebrations with these Spooky Fun Holidays 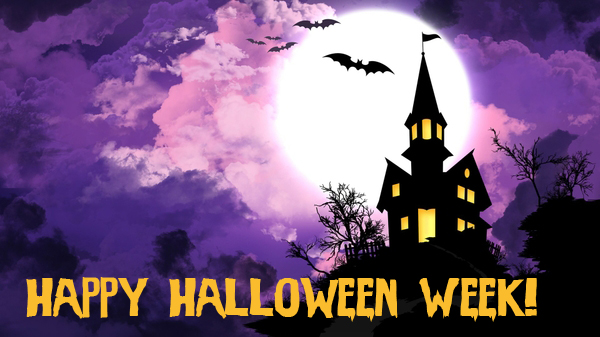 Monsters get restless in the days before Halloween! We’re not very patient creatures, after all. Over the years, we monsters have developed* a series of Halloween Week holidays to help us get into the spooky spirit while letting us create mayhem well before our neighbors are prepared.

So, grab your cape, douse yourself in the blood of the innocent, and get out to celebrate each of the special occasions listed below.

This day could be considered a conflict with National Carve a Pumpkin Day (see below). But we say you can never have too much of a good thing. And pumpkins are considered a vegetable, right? So give yourself permission to play with your vegetables by carving a silly or spooky face in your gourd and placing a safe, battery-powered tea light inside.

AKA, National Frankenstein Day. This holiday takes place on the last Friday in October, and celebrates the birth of Frankenstein and his creator. Celebrate by reading Frankenstein or watching a movie adaptation. Creator Ron MacCloskey awards “The Franky” each year to someone who has made a significant contribution to the promotion of Frankenstein.

Did you know that black cats are the least adopted of any cats? In creating Black Cat Awareness Day, the Brits are bringing attention to the hundreds of homeless black cats that go unadopted because of prevailing superstition. Give some love to black cats today using the hashtag #CPBlackCats. (In America, Black Cat Day is celebrated on August 17.)

Who doesn’t like dressing up as a witch during the Halloween season? The big pointy hat and cool accessories make for a great and versatile costume. So, grab your cauldron or your flying monkeys, practice up on your favorite spells, and enjoy the one day where a green complexion is a sign of good health.

When you’re developing a whole week of Halloween celebrations, who you gonna call? Some sources claim Ghostbusters Day is on August 28, while a few others prefer this day. Whichever day you choose to celebrate, grab your Ecto-Cooler, kick back with some Stay-Puft marshmallows, and don’t cross the streams while enjoying this monster classic (original or reboot).

This is one holiday that doesn’t suck. (Yep. We went there.) Learn about the history of Dracula and have fun with all things vampire on this day. Read the iconic novel by Bram Stoker or watch your favorite incarnation of the vampire lord on the big screen. Throw a Dracula-themed party and hypnotize all your friends into attending.

Registered by Stephanie West Allen just over a decade ago, Create a Great Funeral Day is meant as a time to plan your final send off. Sit down with friends and family and discuss your personal funeral plans, from the songs and verses featured to the words on your headstone. Get the conversation out of the way now to ensure that your family doesn’t screw things up.

Don’t wait until trick-or-treaters come by to watch your candy corn disappear! Put it in a bowl and eat it yourself. Even though this “national” holiday has no clear origin, nor is it necessarily celebrated on a national scale, you can make the holiday your own with as much candy corn as you can stomach. We dare you.

Don’t wait for those lo mein leftovers to become sentient and sprout legs. Take care of them today! According to creators Thomas and Ruth Roy, “Who knows what evil lurks in the refrigerators of men . . . and women. It’s time to be afraid, very afraid. Gather friends, open the refrigerator door, and venture unto the realm of the lower shelf, rear.”

Anniversary of the War of the Worlds

On this date in 1938, Orson Wells read H.G. Wells’ War of the Worlds on the radio. Known forever after as the “Panic Broadcast,” the planned program was designed as merely a theatrical performance. But the combination of the nation’s war anxieties and its broadcast on “Mischief Night” caused confusion and massive national panic. Celebrate this masterful moment of madness by tuning into the broadcast yourself at 8:00pm sharp.

If you haven’t carved your pumpkins yet, today is the day! Grab your scooper and assorted pumpkin carving tools, and block off your afternoon for goopy pumpkin fun. We challenge you to carve one of the SML mascots into your pumpkin this year. Send us a photo—we’d love to see it!

The time has come! Put on your most convincing human costume and head to the most crowded neighborhood in town. Bob for apples, indulge in some witches’ brew, and test out your new pranks. You know what to do.

Thought that because Halloween was over that the holidays were too? Gotcha! There’s one more big one: Day of the Dead. This Mexican holiday honors the dead by offering gifts at the graves of the deceased. Make sugar skulls, gather some marigolds, and go say hello to Great Aunt Edna.

You successfully spent the day before Halloween planning your own funeral. Now, Devil’s Night has come and gone, and you’re still kicking. Take some time today to meditate on your epitaph. Because it’s never too early to start composing your eternal tagline.

If your pumpkins survived being trampled by the hoard of trick-or-treaters who ran screaming from your porch in fear … Congratulations! This bonus holiday was designed for you. Take a moment to delight in the utter annihilation of the rotting corpse of a jack-o-lantern that you’ve been taking such good care of for the last few weeks.

On this date in 1847, Bram Stoker was born on the north side of Dublin, Ireland. It would be 50 years before he wrote his most famous novel. But we recommend celebrating both occasions today—It’s easier than waiting.

*Each of these holidays was discovered online. The popularity and reach of each holiday’s celebrations may vary, if indeed they are even celebrated at all. But we say, any excuse for tricks or treats is good enough for us!