Hellhounds Handbook: Need A Good Job? 4 Effective Ways to Mourn For the Dead For Fun and Profit

Jimmy May 9, 2013 May 24, 2020Lessons in Living with Humans: Ancient Correspondence & Hellhounds Handbook

Would you come to my funeral and cry if I paid you?

Funerals are supposed to be dismal and depressing.

We’re told the dead are in a better place, or their passing was for the best because they were suffering. Many people like to remind us that the recently-deceased are now angels.

Whatever happens after death (I’m hoping for X-Ray vision), one thing is certain, a funeral is supposed to be a celebration of life. Funerals can even be happy events with many people smiling and laughing in remembrance.

But then, just when you felt like you were going to get through this without a hankie, you hear it. That one person, in the front of the room, who can’t co 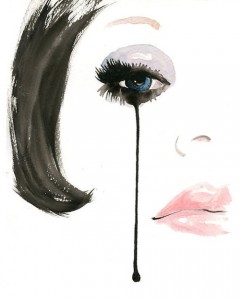 ntrol their emotions. They let it go. Tear ducts wide opened, wailing, pleading with deities. What a show. And once that first person starts crying, it’s a tear-stained free-for-all.

This brand of weeping is such a spectacle. Now what if I told you someone paid the weeper to be there?

It’s true. Professional mourning has long been an accepted practice in China and Taiwan. These professionally trained mourners make money crying at funerals.

It’s considered a dying art form in the East, but it has made its way into the UK. Although, I bet there are some really rich, old, tech entrepreneurs in Silicon Valley who have a lot of cash and very few friends who need a few more weepers at their funerals.

Is it inauthentic to take cash for crying?

Many Taiwanese mourners, most of them females, begin crawling to the coffin on all fours, while hopeless and bleak organ music plays. Their weeping is low and animalistic. They throw themselves onto the coffin, tears flying, almost screaming for the deceased. Wow. Now that’s a freaking show.

This may seem lucrative to you. Perhaps you can cry on demand. You can move to Taiwan and get hired to weep for the recently-deceased. 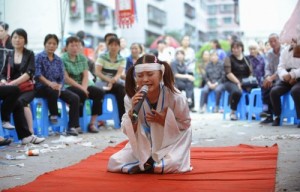 This professional Chinese mourner brings her own PA system for all to hear the weeping.

Here’s four ways to bring the sad to your next funeral.

1) Method Acting: This is a tried-and-true technique that many Hollywood movie actors utilize. You just simply think of a situation in your own life, like the passing of your favorite childhood pet, that makes you cry. Soon, the tears will be flowing and the funeral producers will feel like they are getting their money’s worth with you.

2) Fake it: This is a little riskier. It might seem insincere if you don’t sell your sadness. But faking it is better than nothing.

3) Wear a veil: Girls can get away with this much better than guys. But if you cover your face, who is to say you’re not really sad?

4) Do Nothing: Just cross your arms on the pew in front of you and put your head down. Say nothing. Don’t look up. Don’t make a noise. Sometimes, the quieter a person is, the sadder they are.

Good luck with your new career weeping for the dead. It sounds like great fun. And there may even be free food when you’re done.

I do have some good news. If you want to make crying for the dead a new career path, there will likely be no lack of dead people. Dying will likely be something people do for many years to come.

Hellhounds Handbook: Trick-or-Treat, Smell My Feet, Give Me Something Good to… Read?
SML Ancient Correspondence ~ File Under: And Father of the Year Goes to... (Part 2 of a 3-Part Serie...
Hellhound’s Handbook: When Horror and Virtual Reality Meet