These are two subjects that don’t always play nicely. At least, for middle class, bourgeoisie culture. Now imagine intermixing libido and the great beyond during the 1950s, a decade not known for its tolerance and forward thinking.

Enter Vampira. An icon, an enigma, a question. She was a gothic queen played by Maila Nurmi on California television in the mid-1950s. 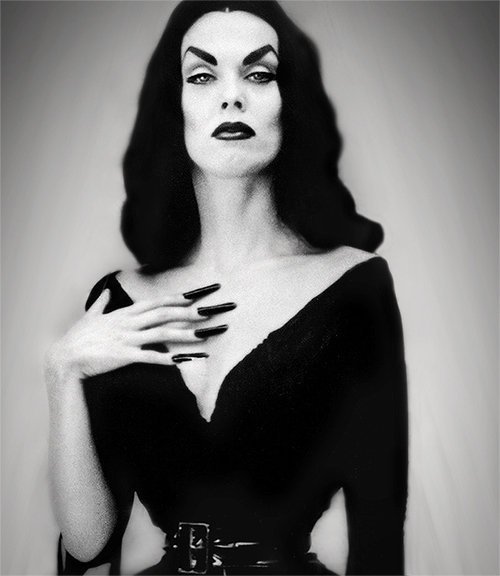 But rumors quickly outgrew her short-lived TV career and her legend overshadowed the facts. She communed with the dead. She cast a spell on actor James Dean shortly before his death. She did pornographic movies. She starred in the worst movie ever made. She had a 17-inch waist. She hung out with punk rock bands.

Not all of those are factual. But hey, why let a little truth get in the way of a good story?

You’ve seen her, or at least a parody of her. She was the skinny goddess dressed in flowing black introducing B-movies on late-night television. And that scream. Wow. She had quite a set of lungs.

Her act has been appropriated by dozens of up-and-coming ladies trying to be the next Vampira. Most notably of these was Elvira in the 1980s. But Nurmi was the original. 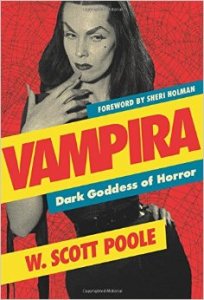 “Nobody had done these things before. Nobody,” said W. Scott Poole, author of Vampira: Dark Goddess of Horror. “People were intrigued by her, but still put off.”

By day, Poole is a professor of history at the College of Charleston. But, by night, he seems to have a darker interest. In 2011, he published Monsters In America: Our Historical Obsession with the Hideous and the Haunting.

Recently, Poole read from and signed copies of Vampira at Malaprops, one of my favorite local bookstores in my hometown of Asheville, North Carolina. He writes and speaks lovingly of Nurmi, a female icon from a time that didn’t recognize she was an icon. This was the time of the submissive housewife on TV a-la Leave It To Beaver, wrapped in an apron and awaiting at the door for her husband to return from work, taking his shoes then serving him dinner.

There are many interesting stories about Vampira. Her brief relationship with Orson Welles or her stint working with Liberace. The worship of her among some gothic/horror punk bands.

But the story I found most interesting is that Nurmi considered herself a Beatnik. You know, those characters from the 1950s, named and lead by Jack Kerouac, drunk on wine and hepped up on caffeine, reading their poetry in all-night cafes to the sounds of trumpets and pianos.

She even appeared in the 1959 film The Beat Generation playing a beatnik. And does a damn good job reading a poem in dark eye shadow while smoking a cigarette.

Stay tuned: I’m going to dig into Poole’s Vampira book and post a review. I can’t wait to read it.

I did ask Poole one question, one that seems to be on the tip of everyone’s tongue, about Nurmi. Was she a feminist? I mean, she did create the inverse of the 1950s American housewife with a gothic, freewheeling sex idol.

Poole said Vampira probably was a feminist, but she never used those words. So, it’s more a label we project upon her. He said she was much more tied to third-wave feminism than anything in the mid-20th century. She used art and performance theater as a political statement against the patriarchy. That is definitely an ethos of more modern day feminists.

Nurmi died in 2008, well into her 80s. But she did experience a little late-in-life notoriety after the Tim Burton film Ed Wood made her semi-famous again. That’s at least a little comforting for a talent who helped light the fuse on the second half of the twentieth century’s sexual revolution.

Until next time, pleasant screams.

Hellhounds Handbook is a series created by Head Monster Jimmy that covers the strange in the monster world, and the bizarre in the real world. Click here for other Hellhounds Handbook articles, and stay tuned for more advice, straight from the Handbook’s fiery pages.