Hellhounds Handbook: No Vacancy for the Living

Do you have a problem with trespassers and vagrants always congregating on your lawn? Do you wish you could just make all of these ordinance-disobeying hooligans go away?

Well now you can. Apparently, nothing keeps litter, the homeless, and neighborhood kids off your lawn like some good, old-fashioned, run of the mill dead people.

I know what you’re thinking. “Where do I find enough dead people who are willing to spend their afterlives protecting my property?”

An unnamed property owner in Houston, Texas, recently had a problem with people littering and sleeping on his little patch of land. His green space, far less than an acre, is overshadowed by the downtown’s skyscrapers. Passers-by would finish their drink cups and discard them on the property without a second thought. 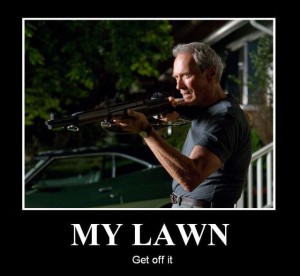 This creates blight in the city and extra work for the deed holder.

But then, the property owner played a dark and macabre prank on the city, and it seemed to work. He’s most definitely my kind of prankster.

The fake gravestones used to keep litter and trespassers out.

Three very real headstones moved in and the trespassers moved out.

Each beautiful headstone displays the name of a real person along with the real date of their death.

Here’s the funny part. These headstones are the rejects from a stone cutter. There are no dead people six feet beneath them. It’s all just a ruse to keep people and refuse off the lawn.

(Yes, this does bring up a few questions. There must be chipped and dented headstones for sale that contain the names and life dates and quotes of dead people that we’ve likely never met. I can’t imagine who the stonecutters think will buy these thrown out grave markers. But it’s probably best we don’t know these people in real life).

Here’s why this is important, not only for landowners, but as a quick lesson in human psychology. 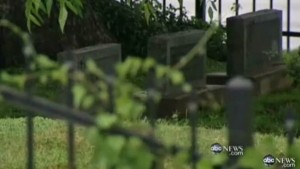 The fake gravestones used to keep litter and trespassers out.

Apparently, most everyone is too respectful or afraid to litter or sleep upon graves, whether or not the tombs contain any dead bodies.

Maybe litterers and trespassers think throwing garbage on a dead person will bring a curse upon them.

This curse could make the graves open and the dead rise. Zombies might emerge from the Earth, quite upset after finding how badly their final resting place has been treated.

The litterer will return home one day to find legions of angry zombies dumping garbage bags full of trash onto their lawn.

Environmentally-unfriendly zombies are the worse kind.

The moral here: Empty Starbucks cups are for the recycle bin, not mounds of stiff cadavers.

Keeping trash where it belongs, and the dead in the ground, are everyone’s responsibilities.