Home Horror Reviews Home is Where the Danger is: An SML Review of “Phobia”

Home is Where the Danger is: An SML Review of “Phobia” 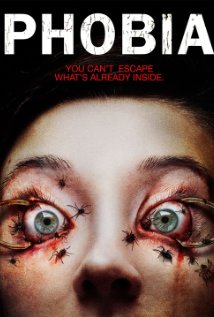 Every now and then, a horror movie comes into your life that really hits home.

As I’ve progressively become less social over the last several months, I’ve relished the opportunity to come home at the end of my work day and curl up on the couch with a good book or movie, only to be interrupted by the sole friend who comes over to check on me and encourage me to move forward with my non-housebound goals.

Then I saw “Phobia,” a new feature film from director Rory Abel and Quiet Box Productions.

In “Phobia,” the agoraphobic Jonathan MacKinlay (“Mac” to his friends) struggles with the death of his wife in a car accident the year before. In his grief, he has withdrawn permanently into his home, and can barely look out the window without having panic attacks at the dangers of the outside world. Taylor, the only friend who seems to have stuck with him through his agoraphobia, brings him pizza and DVDs and has hired a new girl to deliver groceries once a week. Mac and Bree hit it off. She’s struggling with defining her future; he’s struggling with moving beyond his past. It’s a drug-fueled match made in….

But just as things start looking up for Mac, his wife returns, intruders begin chasing him around the house with kitchen knives, and a mysterious woman in black is there behind Mac in his mirrored reflection to remind him that “everyone dies.” Mac finds himself unsafe in his own home, but unable to escape because of his illness. He’s in a fast race with a dangerous finish line, and those close to him may lose if he wins.

There are gory movies and creepy movies and movies that make you want to leave your lights on for the rest of the night. But “Phobia” is a movie whose effects can’t be overcome under the covers. To keep this story from haunting you, you have to leave your home. Venture out into the cold, cruel world. And recognize that sometimes there are fewer demons outside than inside.

“Phobia” has already made a number of festival showings and has taken laurels at the Salty Horror International Film Festival and Queen City Film Festival. There are no eye spiders in the film, but there is some language and nudity. “Phobia” will be available on DVD from RLJ/Image Entertainment on November 25, 2014. To see more about the film, view the trailer below or check them out on Facebook.

UPDATE: “Phobia” is now available on DVD. Buy it from Amazon today.