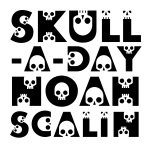 With so many monsters under one roof, the SML Haunted Mansion and Blog Laboratory is constantly in need of more skulls! Now, through his successful Kickstarter campaign, artist Noah Scalin has chronicled his Skull-A-Day project in a delightful new book of the same name. With assistance from Chop Suey Books in Richmond, VA – a great bookstore near the Edgar Allan Poe Museum – the book will soon be available for purchase.

And just in time to make the perfect Happy Halloween gift for the best monster in your life!

We haven’t seen a copy of the complete book as of yet, but we’ll let you know what we think of it when we do.

Chop Suey Books is extremely excited to announce the publication of Skull-A-Day, a monograph featuring the art of Noah Scalin. To be released on October 7th, Skull-A-Day details Scalin’s 2007-2008 project by the same name. Though a few books have featured work from Scalin’s project, this book is the first to detail the entire year-long. All 365 skulls from this project are displayed in full color and chronologically, giving the reader a clear understanding of the time and creative efforts that Scalin applied to his work. Also included are an introduction by Scalin discussing the genesis of this project and a personal recollection of what the project became as the year drew to a close, as well as a foreword by Mutter Museum curator Anna Dhody.

Skull-A-Day began in June 2007 when Scalin, at a creative crossroads, decided he would make a skull every day for the next year. He went to his studio, cut the shape of a skull out of an orange piece of paper, uploaded it to his computer, and started a blog to chronicle his upcoming challenge. Over the next 364 days, Scalin used any and all materials at his disposal to create images of skulls out of light bulbs, bubble gum on sidewalks, googly eyes, acorns, and pretty much anything else you can imagine. Though he worked as much as 12 hours a day on a single project, he finished and uploaded a skull every day.

And as his project grew in scale, so did his audience. By the time he posted his final skull in June 2008, he had tens of thousands of people viewing his blog on a daily basis. Shortly after the end of the project Lark Books published Skulls, a book featuring skulls from the first 5 months of Skull-A-Day, and Martha Stewart had Scalin on her show to talk about his goal and to make the Peanut Butter and Skully (which she then ate!). While the idea of creating a skull
every day for a year came to Scalin as a remedy to a creative block, it quickly became his most popular work. “I never imagined that by the end of my little personal project I’d have strangers coming up to me on the street saying, ‘Hey, you’re the skull guy!’”

Skull-A-Day is the first publication of Chop Suey Books Books, an imprint of independent Richmond bookstore Chop Suey Books. Owner and publisher Ward Tefft initially approached Scalin about publishing this book in 2010. “We have worked with Noah since the store opened in 2002,” says Tefft, “so this idea of working with him to publish this important project was something I really wanted to push for.” Beyond collaborating with one of his favorite artists, Tefft sees this publication as an important sign for the future of books. “In the past few years, the e-book has been presented as a harbinger of the death of the printed book. With Skull-A-Day, we are bucking this popular but unfounded notion; we are taking an art project that exists only digitally, and putting it into printed form.” The release of this 260 page hardcover with over 380 color illustrations is an affirmation that the physical book is far from dead, and can be found at thriving independent bookstores.

The book retails at $25, and can be ordered at www.chopsueybooks.com.