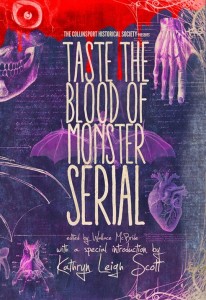 The third book in the horror review series (and second featuring SML’s head monsters, Jim and Sarah), Taste the Blood on Monster Serial is now available for purchase on Amazon!

The book’s cover is designed to look vaguely like an old medical text and focuses exclusively on vampire films. Organized by Wallace McBride of the Collinsport Historical Society, the book also has a heavy focus on House of Dark Shadows (1970), the film following the “Dark Shadows” television run.

If we could glamour you through the internet, we’d compel you to buy your copy today. Here’s a chapter list to get your blood flowing:

The series editor is already planning an omnibus edition of all three Monster Serial books, which will be a 450-page “greatest hits” package. The project already has a commitment from Glenn McQuaid (director of I Sell the Dead, Tales from Beyond the Pales) to pen the intro.

The collection will be squarebound, designed on the outside to look like a record. It will tie into a Monster Serial audiobook that will be released on vinyl around Halloween.

More information is forthcoming, and we’ll let you know as soon as we have the details.

Need to Catch Up on Your Monster Serials?

Click here to purchase your copy of Bride of Monster Serial, featuring three essays from SML.