Home Horror Reviews More than a Monster Flick: An SML Review of “The Mist”

More than a Monster Flick: An SML Review of “The Mist”

Recently I was attacked by the realization that I have not seen a good monster horror flick in a while.  So I popped The Mist into my DVD player to remedy this.  That is The Mist, not to be confused with The Fog, which would be a horrible and grievous error.  Yuck.

Anyway, The Mist (2007) is a harrowing tale of desperate survival in the midst of an attack from other worldly (dimensionally?) monsters that are veiled by a thick and ominous – hopefully you already figured this part out – mist!

The movie starts off with an atypical morning after a rather potent thunderstorm.  David Drayton (Thomas Jane) has a less than congenial altercation with his neighbor, whose tree fell onto his boat shed.  Because they are wealthy and have a boat therefore a boat shed. Putting unpleasantries aside, momentarily at least, David, his son, and the neighbor go into town for supplies to mend their storm-damaged homes.

Needless to say, this is where the defecation meets the oscillation. 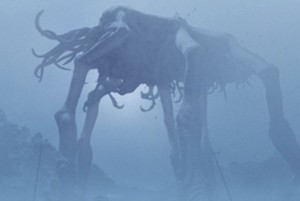 To be honest, the first time time I saw this movie, the first appearance of the monsters was a bit off-putting for me  It had me thinking “Oh great, just another CGI creature feature” and “Did I really just pay 7 bucks to see this?”  (Movie prices five years ago for not-a-matinee.  Oh, those were the days.  But I digress.)

The Mist is much more than it appears.  Like any good horror tale, it is about the people. Not the monsters. With a decent number of people who have barricaded themselves into a supermarket, we get to see the effects that fear, religious ignorance, and mob mentality have on people.  Not to the mention the lengths that they will go to in order to attempt survival.

No spoilers but the end of this movie left me mortified, which is no easy task by any means.

Frank Darabont (director/writer of The Shawshank Redemption and The Green Mile, and writer for The Walking Dead TV series) adapts this Stephen King novella in a way that captures the character and the depths of the human spirit while simultaneously showing how quickly humanity can return to a baser, more primal version of itself.  With stirring performances by Thomas Jane (The Punisher, Hung), Marcia Gay Harden (Mystic River), and Laurie Holden (The Walking Dead) this movie is beautiful, profoundly tragic, and at times darkly comedic.

I give The Mist two thumbs – and several tentacles, or what have you – up.

Also, just for funsies, keep track of the bullet count while you’re watching.  You’ll know what I mean.

Never Buy an Earring without a Match: An SML Book Review of “Puzzleman”
Turkey’s Revenge - A Thanksgiving Review of “Blood Freak”
Need a Bigger Grossout?: Try "The Human Centipede II"