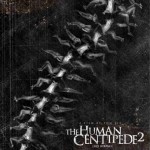 If a sequel is supposed to up the ante of the first movie in order to help build a franchise, then The Human Centipede II does just that.  But not in the normal terms that you would think.

This sequel to The Human Centipede is literally based off of the first movie.  We are immediately introduced to Martin, the main character – who appears to be a middle aged, overweight, possibly mentally perturbed man – via him finishing watching the first movie, possibly ejaculating. 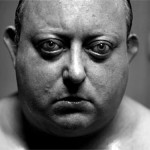 Martin is a sad sack security guard of an underground parking complex who lives with his emotionally abusive mother who never fails to bring up his sexually abusive father that left them during Martin’s childhood.  Oh yea, did I mention she wants to both her and her son to die?  The order in which it happens doesn’t really matter.

To find some sort of solace from his real life, Martin becomes obsessed with the movie The Human Centipede.  More specifically with the “medically accurate” way the doctor performs the surgeries to combine his victims together.  Thusly, Martin is inspired to attempt his own experiment to make a multi-bodied being with a single gastric system.  Only he wants bigger and better (as all sequels must do).  A twelve-person body.  So let the carnage begin. 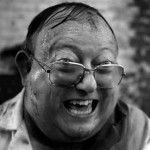 In comparison, the first movie handles a thoroughly disgusting premise almost with kid gloves. For the sequel, it’s as if with The Human Centipede II the studio told writer/director Tom Six, “Screw it.  The movie’s getting made.  Please, go nuts.”

Summed up – this movie is in black and white, has a lot more violence, gore, ass to mouth, and a lot less dialogue.  A must see.  If you’re into that sort of thing.