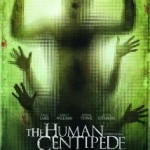 Oh, what can possibly be said about The Human Centipede other than “gross and disturbing?”

If you’re at all into the weird and unsettling than you have no doubt heard of this film.  It falls directly into the category of what I like to call Grotesque European Cinema.  With that in mind we shall delve right into it.

Let’s start with the doctor – a renowned surgeon who specialized in separating Siamese twins has now decided (through a perverse notion of creation and art) to put people together rather than take them apart.  The first attempt in this venture was his beloved three-dog, which is exactly what it sounds like.  Three dogs were sown together in such a manner as to create an entity with three different parts but having a singular gastric system.  You get the idea. 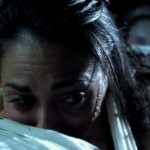 Now on to the victims!  We start with two American girls who are traveling through Europe make a stop in Germany to go sight-seeing and clubbing.  Mostly clubbing.  On their way to a night club they get stereotypically lost in some remote wooded part of the country, out of cell phone range and far from anyone who would want to help them.  And with a flat tire no less!

So they decide to stumble through the woods, and the rain, in their skimpy attire only to unfortunately happen upon the house of the mad doctor.  Also, there’s an Asian man who speaks neither German nor English and spends practically the entire movie yelling subtitles.  He, of course, is placed at the head of the line. 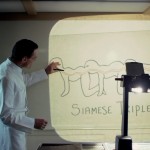 Overall, this movie is about the subjecting of the human spirit to horrors of insanity in an attempt to find the breaking point for obedience.  While, again, gross and disturbing, if you’re looking for lots of blood and tits this is not it.  Although it does have some of both.

Dare to give it a try? Check it out on Amazon Instant Video.