Prepare Yourself for the Year of the Clown (NSFW) 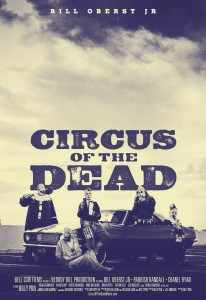 Bloody Bill Pon, director of the upcoming Circus of the Dead, has declared 2014 to be the year of the clown. From the looks of the teaser trailer below, that means we can look forward to a year of terror, mayhem, and bed-wetting nightmares.

This will make our New Year’s resolutions easier to keep!

We wish we could have shared the NSFW teaser trailer with you, dear readers. But, according to Bill Oberst, Jr., the film’s star:

The first teaser trailer for Circus of the Dead was removed/banned from YouTube … after complaints of “extreme content.” Apparently a clown chasing a naked woman down a parking garage ramp with a cattle prod is considered “extreme.” Go figure.

Thanks, YouTube. I guess we’ll just have to wait a few months until the film is available later this spring. Billy Pon will be providing a few minutes of sneak peek footage to the Shockfest Film Festival in Hollywood this month, but a full premiere is not scheduled until the Texas Frightmare Weekend in May.

Until then, check out this slightly less offensive teaser trailer below, along with some recently released screen caps (some are NSFW, unless your employer doesn’t mind violence and female nudity).

We want the clowns!

The Summer is Hot, and So is Horror: An SML Horror News Roundup
For Monster BUFFs: An SML Monster News Roundup
Is Russia Winning the 21st Century Space Race? Not If You Donate Today!