Home Horror Reviews Ready for a Freakout?: An SML Review of “The Fourth Kind”

Ready for a Freakout?: An SML Review of “The Fourth Kind”

While I was pondering what would be a good first line for this review, something to really grab your attention, it dawned on me that all I really need to ask is “Do you want to be freaked out?”  I mean legitimately freaked out, like possibly verging on actually scared.  Well, if you have the reaction that I did anyway.  Who knows, maybe I’m just a big wuss.  It really remains to be seen.

The Fourth Kind is a movie based on a book, based on a story, which uses scenes of actual footage based on research which is based on other research, and so on and so forth.

Dr. Abbey Tyler, in scenes played by Milla Jovovich, is a therapist who has several patients who are sharing the same symptoms – namely problems with sleeping – and all report having seen an owl in their dreams.  Having been brought to Nome originally by her husband, who was recently the victim of an unsolved murder, Dr. Tyler is desperate to try and help her patients anyway she can and maybe even find some answers of her own.  But as she gets closer to what might be the truth, the more people and…not people…want her to stop. 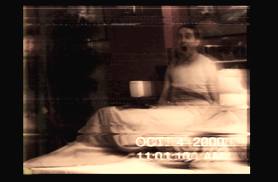 The interesting thing about The Fourth Kind is that it portrays itself as a dramatic retelling of actual events, either video/sound recordings or interviews with the real-life Dr. Tyler from her own experiences, rather than an actual movie. Think an amped-up “Unsolved Mysteries” with better actors and no pedophiles.

It begins with Milla Jovovich giving an introduction of the characters and situations. As the movie progresses, it is systematically sliced with actor portrayals and actual footage side by side on the screen.  I’m not going to lie, the footage and sound recordings that are used are extremely convincing and terrifying.

I’m not sure what exactly to believe, but I am of the opinion that it is conceited and asinine to believe that we as a species are the only intelligent life in the universe.

There are consistent withdraws from the movie itself to an interview with the actual Dr. Tyler that really adds to compelling character portrayals by Milla Jovovich (Ultra Violet), Will Patton (The Postman), and Elias Koteas (The Teenage Mutant Ninja Turtles). 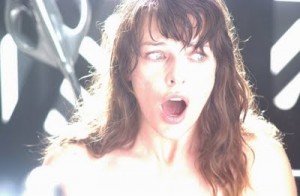 There is a scene near the end of the movie wherein Dr. Tyler is hypnotized, both Jovovich and the actual Dr. Tyler, by her colleague (Koteas) which has honestly just haunted me since I watched it.  Though while during the hypnotic state, the footage of the real-life Dr. Tyler experiences some technological difficulties (…), certain clear images can be seen of her twisting and contorting while speaking in an unrecognizable dialect.  An expert, again in real-life, has said that the language she is speaking has roots in Sumerian and translated some of the audio in captions to go along with the video.

If it can be believed it is positively terrifying.  So, if you are a believer, or just looking to be frightened, then The Fourth Kind is definitely worth your time.

Watch it on Amazon Instant Video, if you dare.