Home Horror Reviews Can Remakes be Remarkable?: An SML Review of “Carrie” (2013) 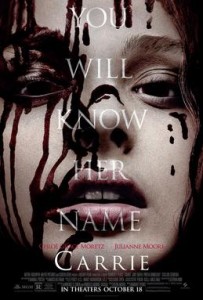 Brian De Palma’s 1976 version of Carrie, which we recently reviewed, is one of the defining horror films of that decade, and perhaps of all time. Sissy Spacek’s sublimely creep-tastic performance was full of nuance and a measure of naivete.

It was clear that Kimberly Peirce, director of the 2013 remake, was a big fan. The film perfectly captured many of the same moments as the original, from the gym teacher’s impulsive face slap during the locker room scene to the way Carrie pouted her lips as she applied gloss for the prom.

Chloe Grace Moretz – an actual teenager as opposed to the 28-year-old Spacek – brought a sense of innocent delight to Carrie as she navigated the new experiences surrounding her prom makeover, which rounded out the scared little mouse played by Spacek. Improvements to screenwriting techniques over the last few decades also helped add dimension to the other “teenagers” while maintaining a good deal of the original dialogue and cadence.

Best of all, in my opinion, were the extra glimpses of Carrie exploring her quickly developing powers. CGI in Carrie 2013 was mostly used appropriately, as Carrie practiced levitating books and her bed, then during the infamous prom scene and its aftermath. The prom scene also felt richer and more filled out, with Carrie reaching out to attack students and teachers individually instead of largely en masse.

In all these respects, Carrie 2013 was a really good remake.

However, it is another matter to say that Carrie 2013 is a really good movie. True, its execution was done well and the casting was by and large great. But for a remake to be remarkable, it has to add to the cannon of the original, instead of merely drawing from it. 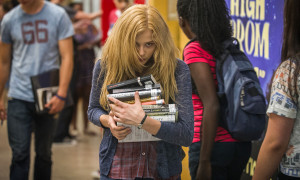 We did get a little more of Mrs. White’s backstory, starting with a pre-gym class scene about Carrie’s birth. And the director tackled well the issue of technology (an ever-present issue in film remakes) by adding some brief commentary about cyber-bullying. But beyond that, I was left wondering why they didn’t draw more from the book and less from De Palma, or what else the director could have said to relate to today’s audience.

In the end, the worst thing Carrie 2013 had going for it was it’s strong execution. It’s great pacing, rich colors, and well-rounded characters were “what did it in,” so to speak. What made Carrie 1976 so creepy was De Palma’s long panning shots, Spacek’s unrelatable awkwardness, and the speed and thoughtlessness of Carrie’s revenge. They were all unsettling.

There was nothing unsettling about Carrie 2013.

So, in my humble opinion Carrie 2013 is a good remake, in the sense that many of the details were accurately and recreated and effortlessly incorporated into the 21st century. But it is not much of a horror film.

What do you think? Check out Carrie 2013 on Amazon Instant Video and let us know which Carrie you prefer in the comments.