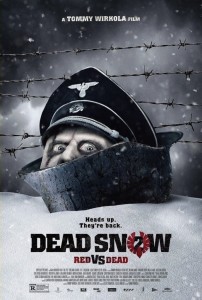 Among the dumbest things we’ve seen you humans do are to go down into that dark basement where the noises are coming from, split the group up in order navigate those woods alone, and give a Nazi zombie CPR.

That last one is new on our list. Before watching Dead Snow 2: Red vs. Dead (2014), we never thought we’d see someone dumb enough to try it. But we guess there’s a breed of dumb for everything.

Red vs. Dead is the sequel to Dead Snow, an amazing Norwegian film from 2009. The sequel is just as much fun, but with a decidedly American twist. The most obvious difference is the lack of subtitles. Those would just take away from all the brutal Nazi zombie action. Instead, Red vs. Dead was filmed in English, and even includes a host of British and American actors. It’s a little more gimmicky and less innovative, in the way that sequels often are, but that tends to be the type of film we really enjoy at SML. And what Red vs. Dead lacks in story innovation it more than makes up for in fun new ways to decimate someone with an ordinary household hammer.

The film begins at the exact moment Dead Snow ends, as the ski trip’s lone survivor, Martin (Vegar Hoel), makes one last mad dash to escape Nazi Commander Herzog and his undead zombie battalion. Martin crashes his car, and wakes up handcuffed to his hospital bed. Of course, the largely inept police forces of Norway think he was responsible for all his friends’ deaths at the cabin from the first film. Even worse, it isn’t his own right arm that had been reattached at the shoulder after the car accident, it’s Herzog’s. 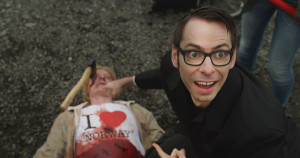 And thus begins the best Freaky Friday-esque story of them all.

With Herzog’s swapped arm in place, Martin sets out to find the Nazi zombies who killed his friends. And with Martin’s arm magically reattached to Herzog by Doctor Nazi Zombie, Herzog sets out to complete the task assigned to him 70-something years ago by the Fuhrer himself: To wipe out the entire Norwegian town of Talvik. Because Nazis.

Martin considers it his duty to take out the man, err, zombie, responsible for the worst ski vacation of all time. Along the way, he teams up with an American zombie squad, which isn’t nearly as badass as Martin expects. But it is led by Daniel, king of the nerds (played by Martin Starr), and features a couple lovely ladies who make way more Star Wars references than we’ve ever seen in a zombie movie. Not that that’s a bad thing. 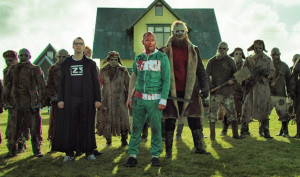 Daniel, the zombie squad, and the most loyal pet zombie tourist ever help Martin learn how to wield his new magic Nazi zombie arm. Together, they use it to raise a dead platoon of WWII-era POW Russians to battle the undead Nazis. Because how else do you defeat magic Nazi zombies with a tank?

What follows are some pretty epic fight scenes, a fair amount of cool explosions, and a lot of head bashing—literally. We finally get the answer to the immortal question: Who would win in hand-to-hand combat, Nazi zombies or Russian commie zombies? And in the end, Martin learns to use his magic zombie arm for love, not hate.

We recommend checking out Dead Snow 2: Red vs. Dead if you haven’t already. It’s one Nazi Hell of a time.