Home Horror Reviews Like Taking Flowers from a Shaman: An SML Review of “Dr. Jekyll and Mr. Hyde” (2008) 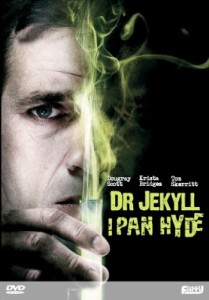 I’ve always said that Mr. Hyde is one of the greatest of the original Universal Monsters. He has never gotten his due, though, likely because he has to share billing with the insipid Dr. Jekyll. Dracula would never stand for such impertinence.

Jekyll and Hyde have popped up occasionally since the iconic 1931 classic with Fredric March and the Spencer Tracey remake just a decade later. More recently, we’ve seen the characters relegated to sidekick roles (The League of Extraordinary Gentlemen) or television movies, with everyone from Michael Caine to Adam Baldwin taking on the pair. James Nesbitt did a very entertaining performance in the 2007 British miniseries, Jekyll. And just last month a new superhero series began in the UK following the grandson of the original doctor.

This review isn’t about any of those. It’s about a 2008 made-for-TV movie simply titled Dr. Jekyll and Mr. Hyde, starring Dougray Scott.

The film begins in the first-person camera style with Hyde stalking a cheaply dressed hooker on a street corner. After a second girl is strangled, Jekyll presents her necklace to attorney Claire Wheaton (Krista Bridges) in an attempt to turn himself in. She refuses him at first, but quickly begins to trace his story.

Jekyll’s work started in the Amazon with an exotic flower given to him by a shaman. I don’t know much about Amazonian shamans, but I’ve seen enough movies to know that they can hold their shit together better than a Harvard-educated white guy. Poor Jekyll didn’t get that memo.

The good doctor used his remarkably well-lit basement laboratory to distill the psychotropic compounds of the flower. His attempts to test the compound on himself, of course, led to the growth of Mr. Hyde. Disgusted by Hyde, Jekyll worked tirelessly to find an antidote. (Actually, it seemed pretty easy to whip one up.) Then, true to television movie fashion, Jekyll has an antidote ready—in the syringe and everything—just as the police arrive to arrest him.

Where the movie goes wrong is its attempt to make the story into a police procedural. Instead of embedding us into the sordid mind and dastardly deeds of Edward Hyde, and Jekyll’s struggle to fight them, we get shoved off on his attorney, instead. Wheaton is convinced that Jekyll is innocent and covering for someone. Despite everything Jekyll tells her from his jail cell about his other half, she prefers to believe that Hyde is still on the loose. Her sleuthing gets her nowhere fast, except to a courtroom in front of a jury. Meanwhile, the audience is left wondering why we’re not watching Scott.

At the time this was released, Scott was probably best known for playing Prince Charming on Ever After alongside Drew Barrymore and for a recurring role on “Desperate Housewives.” That being said, he transitions nicely to a schizoid sociopath. Still, Scott’s Hyde is more of an unhinged attacker than the calculated psychokiller he could be. Sure, if I met him in a dark alley, I’d run for my life, but as a viewer I didn’t finish the film with a need to lock my doors and windows or check under the bed.

Overall, this version of the film felt weak and off base from the original. I don’t recommend spending your evening with this movie, but if you’d like to give it a try, you can check it out here on Amazon Instant Video. 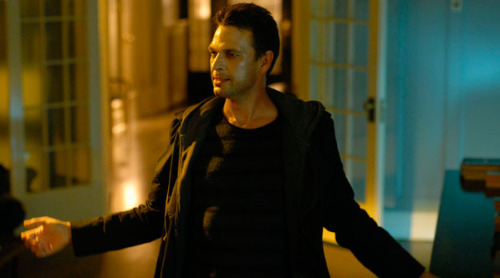