Home Horror Reviews “That’s Not My Tooth!”: An SML Review of Severance

“That’s Not My Tooth!”: An SML Review of Severance 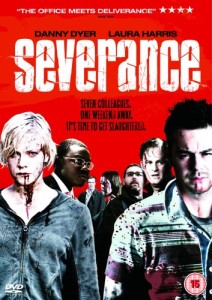 Full disclosure: one of the reasons I haven’t reviewed this film yet is because I love it so much, I didn’t want the review to be done and over. Severance holds a special place in my heart. I first saw it in a theater during a film festival in Asheville, NC, while I was in college. Probably in spring of 2006. There’s more to the story than that, but the short of it is that the film quickly became one of my favorite horror films ever.

There are several breeds of horror films. There are groundbreaking horror films that turn the genre on its ass, like It Follows. There are abhorrently grotesque gore fests like Human Centipede I and II. And there are horror films that play the genre to its fullest, without taking it or themselves too seriously. Perhaps like Shaun of the Dead or the Dead Snow films. Severance (2006) follows squarely in that category.

Coming out between the first two Hostel films, Severance takes the gore and xenophobia of that franchise and mixes it with the nihilistic corporate culture of Office Space. The film begins as department members of multinational weapons conglomerate Palisades Defense ride in a chartered bus on their way to a team building weekend in the wilds of scenic eastern Europe. Just as they cross the border into Romania, the native-speaking bus driver stops the vehicle and refuses to go an inch further into the forest. The team leader, Richard, believes that the group can simply walk the rest of the way to their hotel, so he pulls them off the bus to continue the journey on foot.

Richard declares the first building they come across to be the “luxury lodge” they’ve booked for the weekend, and—despite the team’s protests—they settle in there for the night. 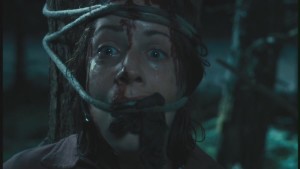 Unfortunately for the crew, their team building weekend is interrupted by a series of horrific events. Let’s just say, when one of your good guys is a former bond villain (Toby Stephens, Die Another Day), the bad guys have to be seriously badass. And when it’s 2006 and your bad guys are Russian war criminals who have been camped out in the woods for (seemingly) decades, unaware that the Cold War ever ended, you’re in for a long weekend.

Oh, and did I mention they have a personal beef against Palisades Defense?

What follows is a series of delightfully gory death scenes, wherein each member of the team is picked off, one by one. There are literally skeletons in the closet, creepy faces at the window, spooky bedtime stories of psychologically demented commies, and at least one very questionable meat pie.

I won’t spoil the sex fantasies, decapitation jokes, extra teeth, bear traps, and paintball games gone wrong. Those are what give the movie its bloody, dismembered heart. But I will tell you that the climax of the film involves a missile launcher, a very tiny boat, and two hookers with a strong will to live.

And, really, what more could you want after a long weekend in the woods with your inept coworkers? 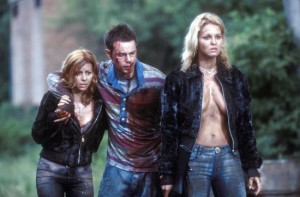 Severance wasn’t a blockbuster hit. Nor will it keep you up for nights on end (unless you have a really healthy fear of Russian-infested forests). But it is one of those rare horror films that invests in character development (and, ironically, team building) before indulging in the deadly gore of unseen villains.

Can the “heroes” beat the villains and get out of the woods alive? Well…it all depends on whose side the hookers fall.

I bought Severance on Amazon Prime, but you can watch it here through their instant video service. I hope you enjoy the film as much as I do.