Home Horror Reviews Never Nap with a Loaded Rifle: An SML Review of “The Sasquatch Murder”

Never Nap with a Loaded Rifle: An SML Review of “The Sasquatch Murder”

If you follow news surrounding the evolution of man—as we all do—you’ll know that every few months, archaeologists seem to come across a new tooth, jawbone, or pinky toe that could rewrite early human history as we know it. When did humanity first wander out of Africa? At what point did we begin to diverge from our Neanderthal and Denisovan cousins? What does this mean for the history of humanity…and its future?

None of these questions are answered by the new novel, The Sasquatch Murder.

However, author Jeffery Viles does speculate about a branch of proto-humans that split off from the tribe somewhere in the Pacific Northwest, sometime before time was known. These bipedal hominids evolved separately from the rest of the native tribes, retaining their furry bodies and growing taller as they thrived among the towering redwood forests. The humans eventually came to call the others “Sasquatch.”

Himself a professed “Sasquatch agnostic,” Viles creates a rich history for the Sasquatch living within a stone’s throw of Aurora, Washington. As humanity’s nearest cousins—even though we’re estranged—the creatures display foresight, ritual, hierarchy, and culture. Just not in deliberate view of any onlookers.

When Mount St. Helens begins her periodic rumbling, the balances of nature begin to tilt just enough to make close encounters possible. It was then that the young widower Jake Holly rode through the surrounding woods on his horse and changed the course of human history…for at least a couple months. A half-asleep Jake accidentally fires on a Sasquatch couple and inadvertently kills the female of the pair. Not knowing what to do with the…body? corpse? carcass?…Jake takes her back to town to await the judgement of scientists and the press. But instead, he invites the wrath of the Sasquatch upon the small town. And no towny is ever the same.

The subtitle for the debut novel is “A Love Story.” It is indeed that, but certainly not in any salacious way. The human side of the plot centers around Jake and his younger girlfriend, Jessica. The pair battle Jake’s tragic past and their future together against the wishes of Jessica’s powerful prosecutor father. But despite the events at hand, the two remain level headed enough to never battle each other—a true match. 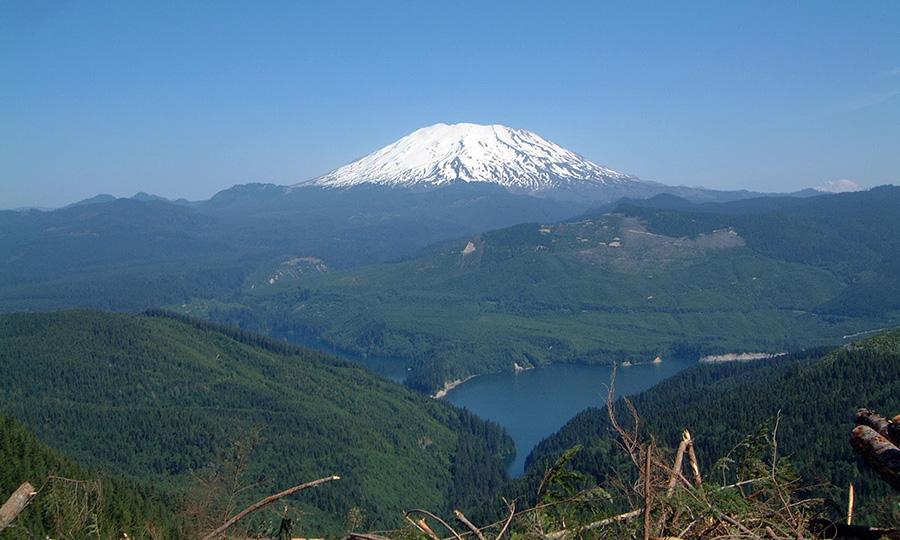 For a debut novel, Viles weaves an engaging and enjoyable tale. The secondary characters are well developed, and we’re including the setting among them. The rumbling mountain and surrounding forest take on convincing personalities of their own. The town locals are colorful characters who engage in the kind of referential and bombastic dialogue reminiscent of His Girl Friday or The Thin Man. And while the conflicts of the novel rumble along like the nearby mountain, they too erupt just strongly enough to disquiet local preconceptions and relationships.

In a world of high-speed chases and bank robberies and intercontinental ballistic missiles that can only be thwarted by an elite team of four random people at the FBI with no oversight, The Sasquatch Murder comes across as a quiet novel. While there is one additional fatality, most characters are left with few bruises—to their egos or otherwise—and manage to almost completely avoid the invading government agents and influx of journalists that hurry to the scene of a Sasquatch murder. Like the Sasquatch themselves, the townspeople of Aurora take a glancing blow and are then able to retreat back into their natural lives. More or less.

While this may not satisfy high-octane readers, we think the tone is appropriate for the setting. Aurora and its folk—human and Sasquatch—are deliberately simple. They care for their own, they try not to harm others, and they have managed to get along for generations because of this. They understand their environment, and they do what they can to care for it.

What The Sasquatch Murder lacks in S.W.A.T. teams, it more than makes up for in intelligent, self-aware characters. That these characters come from two different species inspires the reader to sit back a moment, take in his surroundings, and contemplate just what it means to be human.

Our book came with free samples!