Say what you want to about Romanians. But they sure do have a sense of humor about dying.

Well, at least they do in the tiny little burg of Sapanta. When its residents pass away, they are lampooned for all eternity. I think this is what you call adding insult to injury.

In North America, we have no sense of humor about death. (Except for Christopher Hitchens. That guy’s writing made dying seem hilarious and fun.)

Here, it’s sad, confusing, and costs a lot of money. Americans like their graves to remind everyone that they were good parents, hard workers, moral citizens, and frequent church members. A typical grave marker in modern America will say something like, “Here’s lies so and so, a devoted husband and father. Now in the arms of our savior. Rest in Peace.” 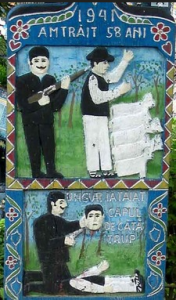 In Romania, it all started in the 1930s with Stan Ioan Patras, a young man who had the job of carving the town of Sapanta’s grave markers. Maybe he got bored with the standard fare of just the facts with a sprinkling of faith. He decided to give the dead a little pizazz. Why does dying have to be so depressing?

Most of us have lived a less-than-perfect life. What if you drank and smoked and missed Sunday service sometimes, especially after a Saturday night binge? What if your kids think you were stupid? Or you were a fornicator? Or you hated your mother-in-law?

Patras knew it all. And he didn’t think the meaty details should be left off your grave marker. His town’s little graveyard, called “The Merry Cemetery” has over 600 cemetery plots with such markers.

He put it all in, sometimes disguised as a little poem filled with dark humor and some modesty.

“Here I rest. Manaila Ion Mahumesc . . . . There are few people like me. I was a nice guy and handsome. But I have not been lucky because I died as a young guy and my body is now destroyed in the earth.”

Oh my goodness, that’s hilarious. It almost makes me jealous to be alive.

Each wooden grave marker Patras carved is colorful, with reds and blues and deep greens. Each one depicting the person’s life, or their favorite vices, or scenes from work.

“Here I rest. Pop Ion Osu. . . . . .  I shall eat the cheese sandwich. And after I shall eat, I shall take my sickle and cut the grass because that is the way a peasant works.”

What? Pop was a peasant worker and he liked cheese sandwiches? It’s like I knew him his whole life. That grave marker really made Pop come alive.

Did I say “come alive?” Whoops.

I don’t know about you, but these grave markers sure make death seem a little more enjoyable.

I’m looking forward to it now. See you there. 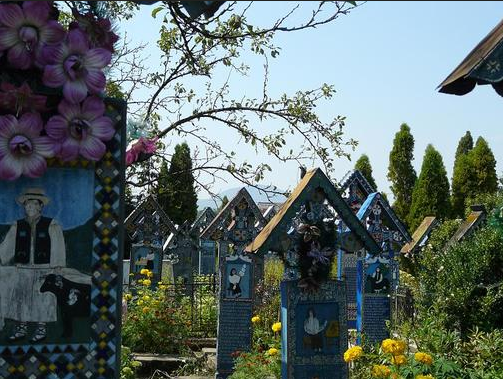