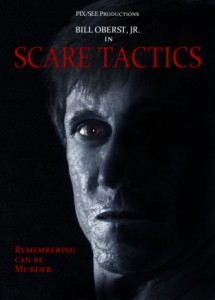 UPDATE: “Scare Tactics” has been retitled as “Deadly Revisions,” and is now in post-production. According to a recent email from Gregory Blair, the film is looking amazing, and the only big difference we see is in the name, which surely better reflects the writer-turned-nut case plot line. We can’t wait to see the final product! -SML

The Haunted Mansion and Blog Laboratory recently got wind of a new horror project by writer, director, and actor Gregory Blair. “Scare Tactics,” slated to start filming in the fall, is about a man recovering from a coma at a cabin in the woods when his lost memories start coming back to haunt him… and attack him.

Bill Oberst, Jr. will star as Grafton Torn, a man teetering on the edge of madness as he faces nightmares that may be memories, may be images from the stories he created, or may possibly be more.

The project has secured the historic Kelly Gulch cabin for the film – the location used in “Friday the 13th Part IV.”

It seems like all the elements are there: creepy cabin, consistently spooky actor, unlikely plot with drugs, nightmares, and head games. Let’s hope the film takes us to all the places “Secret Window” should have.

“Gregory has a talent for writing great scripts,” co-producer Roxy Shih of Good Kids Productions said. “SCARE TACTICS totally freaked me out and I knew I wanted to be involved!”

Bill Oberst, Jr. is virtually a horror icon. His unsettling screen presence has haunted dozens of horror films and his role in “Take This Lollipop”–the most popular (and frightening) application in Facebook history has made him an international phenomenon.

“I’m usually the bad guy,” Oberst says. “But SCARE TACTICS lets me be the one getting tormented. The question is…by who? Or what? It’s great because all of the horror fans I know are bored with clichés. SCARE TACTICS plays with all the clichés and twists them around. So it’s really fun.”

Blair recently took top honors in the Horror Screenwriting Contest for another horror screenplay, THE SISTERHOOD. That’s when he approached Bill with SCARE TACTICS.

“We had been talking about working together,” Blair says. “THE SISTERHOOD wasn’t the right vehicle for Bill, but SCARE TACTICS seemed a perfect fit. How fun would it be, we both thought, to have Bill on the other end of the hatchet for a change?”

Blair and Oberst are betting it will be fun. Bloody good fun. 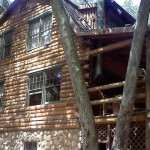 To help fund the project and get a credit in the film, you can donate to the film’s fundraising campaign.

More more info about the film, staff, and stars, click one of the links below:

Get Your Tickets Now!: GeekOut 2015 to be Held June 6-7
A Severed Foot is the Ultimate Stocking Stuffer: An SML Monster News Roundup
3 Awesome Things to Check out from Hex Studios Right Now