Female-led “Seize the Night” Takes Us by the Jugular 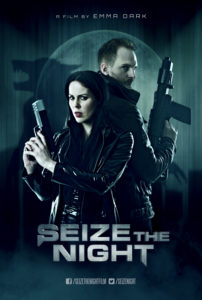 After escaping from a secret government bio-research compound, renegade vampire assassin Eva (Emma Dark) is hellbent on revenge. Receiving a tip off from the mysterious Dante (Anthony Ilott, Wrong Turn 6: Last Resort), she meets with arms dealer Joe (Paul Ewen, Cockneys vs. Zombies), who informs her that an enemy is hot on her tail. Eva hunts the hunter and encounters a team of werewolves, led by pack alpha Tobias (Carey Thring, From Hell). During their confrontation, Eva learns a terrible secret and is forced into a situation of such gravity she may have to join forces with the devil she knows in order to fight the greatest of all evils.

If that sounds to you like the plot of a new theatrical feature film, you’re not alone. We were surprised by the breadth of story in “Seize the Night,” condensed into less than 13 minutes of screen time. Read more about the project below, then watch for yourself.

Horror lovers will be pleased to hear that the highly anticipated vampires vs werewolves action-horror hybrid SEIZE THE NIGHT is now available to watch online, for free!

SEIZE THE NIGHT has been one of the most talked about short films on the independent horror scene over the past year. In its time on the festival circuit, the film has won creator Emma Dark an MMBF Rising Star award at Ireland’s The Yellow Fever Independent Film Festival, garnered favourable reviews from a multitude of respected genre websites including Dread Central, Starburst, and UK Horror Scene, and been featured in comprehensive national print articles in the UK’s leading horror magazine, Scream, and indie filmmaking favourite Digital Filmmaker Magazine. Wearing many hats on the project, up-and-coming female filmmaker Emma Dark both produced, directed, and edited the film, as well taking a starring role.

SEIZE THE NIGHT’s ambitious fight scenes were coordinated by semi-retired Hollywood stunt man Roy Scammell, who amongst a plethora of credits is responsible for fight coordination and stunt work on many of the James Bond films, Alien (1979), A Clockwork Orange (1971), and Superman (1978). The film is further enhanced with digital visual effects from up and coming VFX artist Davy Simmons and a unique score from US-based composer Eric Elick.

Emma had this to say about the film’s release: “After a very successful stint on the festival circuit and a lot of media and critic support it’s finally time to press the button and unleash SEIZE THE NIGHT upon the world!  Myself and my cast and crew have put an absolutely incredible amount of work into the film so I do hope it’s well received, and that it does it’s part for raising awareness of female directors and filmmakers in a typically male dominated space.

“There’s more to come with a limited DVD release for those who want to have their own copy of the film, and a whole host of behind the scenes extras I’ll be posting up over the coming weeks.  Until then I hope everyone enjoys watching SEIZE THE NIGHT.”

Seize the Night from Emma Dark on Vimeo.