The only thing this monster loves more than B-level horror films is a good, cheeky horror spoof. And nobody does cheek better than the British.

Stuff Monsters Like recently screened “Saw Misgivings,” a 2012 short film from UK-based production company Loonatik and Drinks. According to the film’s director:

‘Saw Misgivings’ is a tongue in cheek horror/comedy based around the ‘Saw’ franchise.  It’s a kind of ‘Saw’ meets ‘Everybody Loves Raymond’.  ‘Saw Misgivings’ finds Janey, a suburban housewife, preparing for dinner guests while being hampered a hapless husband and wearing a ‘Saw’-style medieval headtrap which could kill her at any moment. Will she escape death?  More importantly, will she get dinner ready before her guests arrive?

Check out the film below, or click here for the Vimeo link. Don’t forget to sit through the credits. Apparently Janey wasn’t the only person in town who suffered from a case of the Mondays. 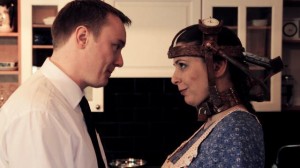 “Saw Misgivings” was directed and produced independently by David Lilley, and written by Mark O’Connell. The film stars Vicky Album and Steve McNeil. The short film has been screened at the Leeds International Film Festival, San Sebastian Horror Festival, Lund International Fantastic Film Festival, among others, and was nominated for the 2012 Melies d’Argent award.

Visit the Loonatik and Drinks website for more information about the short, or to see what other projects the production company has in the works.