SML Ancient Correspondence ~ File Under: And Father of the Year Goes to… (Part 2 of a 3-Part Series)

We ended our last post with Aegisthus, who killed his uncle after Atreus served Aegisthus’ father (*cough* and grandfather *cough*) his older children to him as a main course. Aegisthus killed again, but before we get to that murder, let’s look at the victim, Agamemnon.

It’s difficult to think of Agamemnon as a victim because he was . . . a jerk. Like, a big one. You might remember him from the Iliad. 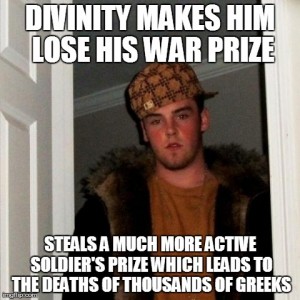 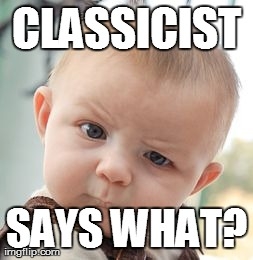 Edification Ahead: The Iliad, one of the most important works in Western literature, but a really, really long book, begins with a fight between Agamemnon and the hero Achilles. Agamemnon refused to give back his war prize, the daughter of Apollo’s priest. Apollo does not take kindly to this, so he strikes the Greeks with pestilence. Agamemnon is finally convinced to give the girl back but he demands to take Achilles’ war prize, a woman named Briseis, in her place. When he seizes the woman, Achilles refuses to continue to fight, and without their greatest hero, the Greeks have countless losses.

This interaction says a lot about the valuation of women in Homer, as well as the dilemma that a soldier faces when he is fighting a war he doesn’t believe in under a commander he doesn’t trust.

But the main point is that Agamemnon is a scumbag. 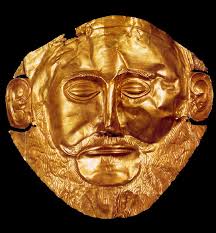 And there’s even more to hate Agamemnon for! There’s so much more. Before the Trojan War began, the Greeks were trapped at Aulis by strong winds thanks to Artemis who was angry on account of mortals coming and messing around in her woods. 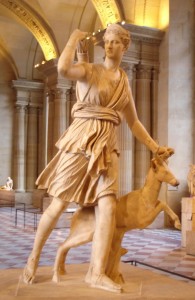 For the goddess of the hunt, she gets inordinately mad at hunters.

Agamemnon learns that the only way to appease the goddess is to offer the sacrifice . . . of his own daughter. Dun, dun, dun.

Now, this is cruel and unusual. But why do we hold a grudge against Agamemnon instead of Artemis? Probably because Agamemnon told the girl and her mother, Clytemnestra, that he needed them to join him from home so that the young girl could marry the hero Achilles. So, the girl gets dressed up and proceeds to where the army is waiting, ready to meet her true love. Except what’s waiting for her is death at the hands of her father. Thanks, dad. 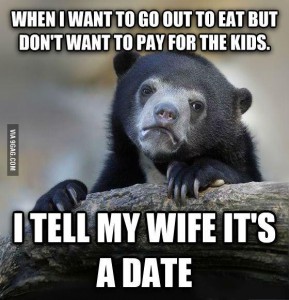 So, Agamemnon kills his youngest daughter, Iphigenia. The winds let up, and everyone sails to Troy. After ten years, Agamemnon returns with not Achilles’ war prize but another war prize, the lunatic prophetess Cassandra. Ancient authors have struggled with what exactly made Clytemnestra more mad: the death of her daughter or her husband’s new mistress. Cassandra was beautiful enough for a god, Apollo, to fall in love with her and then . . . well, drive her insane and make it so that no one ever believes her true prophecies so she has to watch them all come terribly to fruition. Love stinks.

What Agamemnon, the son of Atreus, does not know is that his wife has started shacking up with his cousin, Aegisthus. YES – THEY’RE COUSINS! The two kill Agamemnon. Sources differ on who does the actual killing, but what’s important to know is that during it, Clytemnestra had a “man-killing ax” which gives us this beautiful picture of the woman we love to hate. 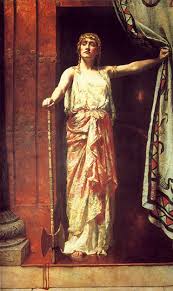 I am woman. Hear me roar.

At the time of the murder, Agamemnon and Clytemnestra’s son, Orestes, is away but he hears of the dastardly deed. And it just gets worse from there. 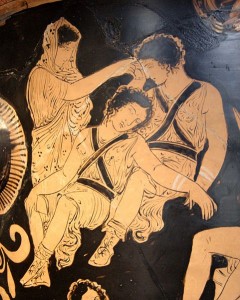 Like two-year-olds, these creatures may look nice when they’re asleep but once they’re awake . . . May Zeus have mercy on your soul.

The Orestes Saga continues in the next post from the SML New Ancient Correspondent  . . .