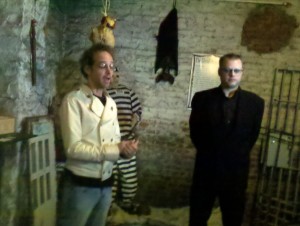 McDivitt and Warren speak in front of one of the Asheville Mystery Museum’s exhibits.

Forget “Paris of the South.” Asheville, NC may soon be known as the “Transylvania of Appalachia.”

Joshua P. Warren, Asheville resident and internationally renowned paranormal investigator, has a few new projects up his sleeve that could put the city on the map again, but this time for something a little more sinister.

Warren and his co-creator Tadd McDivitt will be hosting a “Vampire and Occult Tour of Asheville” starting on October 6, 2012. The tour will address local conspiracies, dark and tragic events from Asheville’s past, and even tip tour participants off to the local vampire scene. The tour departs from the Asheville Mystery Museum, located in the basement of the historic Masonic lodge in downtown Asheville.

Wait. Have you never heard that Asheville has vampires? “That just means our vampires are clever,” said McDivitt, who cited the city’s population of witches, shamans, and holistic healers (a practice based in Eastern religions) as proof of Asheville’s wide ranging local character. Paired with a subculture of transients and a history of disappearances among them, the tour leaders say that vampirism may exist here. 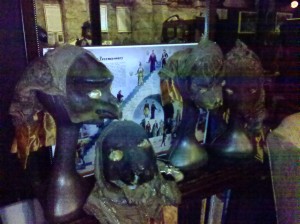 “If we understood it, it would be science, it wouldn’t be paranormal,” said Warren.

Warren is also taking his fascination with current paranormal events back to the television screen. Previously seen on the History Channel, Discovery Channel, and even Animal Planet, Warren can now be seen on the Travel Channel’s new series, “Paranormal Paparazzi.”

Called “the TMZ of the paranormal,” “Paranormal Paparazzi” finds Warren touring the nation to explore strange activities. Warren promises a fun, fast-paced program. And with two back-to-back half-hour slots, that is sure to be the case. 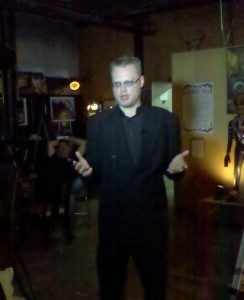 Have trouble watching spooky things alone? Join the premiere party Friday, September 28, 2012 at the Wild Wing Cafe, 161 Biltmore Avenue, in Asheville. Joshua P. Warren will be there, answering questions and telling behind-the-scenes stories about the Lizard Man of Bishopville, SC – the subject of the premiere episode.

Warren promises that the show will have an element of humor, as well. “There’s something inherently absurd about the paranormal,” Warren said.

Humor AND horror? Count us in.

Click around for more information about Joshua P. Warren, the Asheville Mystery Museum, or the “Vampire and Occult Tour.”