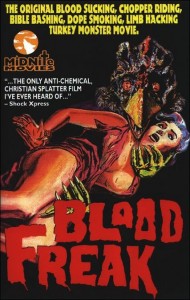 There are not many Thanksgiving horror movies. It’s like the forgotten holiday of spooky splatter films.

We sent the SML Haunted Mansion and Blog Laboratory minions to find a Thanksgiving themed horror movie all the monsters could enjoy. We expected them to bring back “Home Sweet Home” or “Thankskilling.” But we forgot how unreliable minions can be.

Instead, our underlings brought us 1972’s “Blood Freak” – a grindhouse film about a half-man-half-turkey who goes on a pot-fueled rampage against drug dealers, thirsting for their chemical-addled blood.

The movie features a Vietnam vet who returns home to get involved with a group of junkies and drug dealers. One of the girls gets him a job with her mad scientist father, who turns him into a turkey-man, and horrific hilarity ensues.

The director must have been in love with the lead actor because the opening credits feature actor Steve Hawkes’ name three times. The director is easy to spot because he makes frequent cameos throughout the film. He appears in an unbuttoned silk shirt with flower print and chain smoking while giving Public Service Announcements about the dangers of drugs. You don’t see this technique used very often. 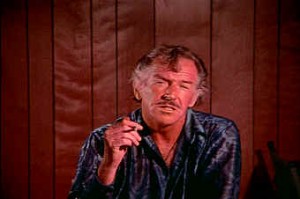 We assumed the cheap Vincent Price mustache the director wore was an homage to the classic horror films of the past generation. And his heavy-handed Twilight Zone-like introduction must have been his attempt to tap into that classic television format.

However, the director’s attempt to use a classic horror/sci-fi format ended there. The dialogue was riddled with groovy early 1970s slang – “right on,” “gone,” and “putting me on.”

This film was not afraid to break all the taboos, like scenes where actors eat roast turkey in front of live turkeys. And real scenes of fowl slaughter. Now that’s just sad. We aren’t vegetarians, but show some class. If PETA had been around in the early 70s, we are sure they would have been calling Mister Faux-Vincent-Price director night and day.

Also, a groovy chick makes love with the turkey man in the bedroom of a flophouse. Talk about being “Far Out.” Oh, and don’t worry about the man who gets his leg cut off with the power saw. He was already an amputee in real life. 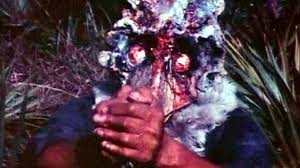 This movie made us realize how thankful we should be this holiday season. We are thankful that we were not born turkeys, that there is no crazed turkey man going after our chemically-enhanced blood, and that our mad scientist father works with bears instead.

View “Blood Freak” with your loved ones this Thanksgiving holiday, and next year you’ll have the holiday all to yourself. Enjoy.