The Unkindness of Ravens Set to Premiere at FrightFest 2016

The Unkindness of Ravens Set to Premiere at FrightFest 2016 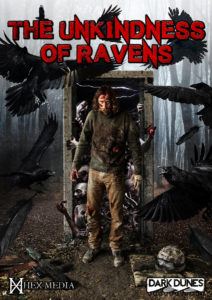 The Unkindness of Ravens, the much anticipated second feature from Lawrie Brewster, will have its world premiere at London’s FrightFest which runs from the 25th to the 29th of August.

The film tells the story of Andrew, a homeless veteran suffering from PTSD. Haunted by flashbacks of a traumatic event he witnessed while serving in the armed forces, Andrew travels to a retreat in the remote Scottish Highlands. There, he hopes to overcome his fear of ravens, the dark creatures that trigger his visions, but, in the bleak wilderness, his nightmares take a form more terrifying than he could have ever imagined. He must battle these monsters as well as his own inner demons in order to keep his life, and reclaim his sanity.

Starring Jamie Scott Gordon, the film blends the psychological with the supernatural, taking cues from films like Jacob’s Ladder and The Witch as it depicts one man’s nightmarish journey into hell. Featuring a slew of practical and visual effects, the film has an epic scope that defies its indie credentials.

Lawrie Brewster’s first film, Lord of Tears, a slow-burn gothic chiller also penned by writer Sarah Daly, received critical acclaim and earned the duo an avid fan base. With this, their second feature, they want to push the boundaries of the genre further.

According to Brewster, the film ‘is an unsettling, visceral commentary on the mental turmoil that war leaves in its wake. It’s brutal, it’s relentless, but it’s also thought-provoking. Expect to be traumatised.’

Back in December 2015, the film broke records when it became the most-funded UK horror ever on Kickstarter with 635 backers pledging over £44,000 to help complete the project. Following the premiere, backers can look forward to a real treat in the Special 3-Disc Edition of the film, set to include hours of behind the scenes action, interviews, deleted scenes, short films, and more. This Special Edition is available to pre-order now at: theunkindnessofravensmovie.com.

An international co-production between Hex Media and Dark Dunes Productions in association with 3rd Monkey Productions, Lights Out Productions, and Zoghogg Studios, The Unkindness of Ravens is set for release later this year.

Also on the line-up for this year’s horrorchannel-backed FrightFest are Adam Wingard’s eagerly anticipated The Woods and the latest Stephen King adaptation, The Cell. Sang-ho Yeon’s Cannes title Train To Busan will close the festival.

Horror Channel FrightFest is the UK’s biggest, best, and most renowned genre festival. Its seventeenth year sees yet another enhancement of its core mission to bring the finest in home-grown and international fear to the dark heart of London, between 25–29 August.

WATCH THE TRAILERS FOR THE UNKINDNESS OF RAVENS BELOW:

Your Weekend Watchlist: An SML Monster News Wrapup
Happy Holidays from the Owlman
This June, Send us to the Moon!